Akaname are humanoid monster girls from the Zipangu Region, notable for their extremely long tongues. Like many of the Zipangu monsters, they are not especially violent, although, entranced by the scent of men to human settlements, they lurk in wait to pounce on their victims. During sex, they like to lick their victim all over, tasting his sweat. In this way they are similar to beelzebubs and certain slimes.

A monster characterized by having a long, skinny tongue that inhabits the Zipangu region. As their name suggests (akaname means "filth licker"), they mainly feed on the "filth" of human men. They make their flexible tongue crawl all over a man's body, licking up every bit of filth. They tend to prefer unhygienic, mentally- or physically-fatigued men. They suddenly appear out of nowhere in human settlements, lured by the scent of men, and wait for their prey by lurking in bathrooms, etc.

They have a slippery personality that is difficult to assess. They outwardly behave in a teasing manner, but their true nature is very obsessive and lustful. Their tongue-usage matches their personality, and when one thinks they've licked all over every inch of the male body, they'll rub their face against the delicious places where it's especially easy for filth to accumulate such as the armpits, the penis, etc., and continue licking deliberately and persistently, intent on spending plenty of time savoring the aromatic taste and scent. The caressing of their alluring tongue alone is enough to easily lead a man to ejaculation.

The kind of "filth" they prefer isn't simply what is generally known as "filth". Just as monsters are always continually releasing demonic energy, humans also excrete their old spirit energy outside of the body as it becomes unneeded when it is replaced by new spirit energy produced inside the body. Part of it sticks to the body as invisible "filth". Of course, they love the fresh spirit energy contained in semen, etc., as well as the ripened spirit energy that became filth. They say it has a thick taste that sticks inside their mouth. Additionally, the demonic energy rubbed into a man's body by their tongue has the effect of boosting the metabolism. A man's body will start to work hard producing new spirit energy and releasing the old as filth, resulting in a treat for them.

Men who become their husband and get licked all over like crazy on a daily basis will always maintain a fresh supply of spirit energy, which is their vital energy, and harmful waste will be continually excreted outside the body, so the mind and body become active, the body becomes healthy and fatigue will recover rapidly. Stamina increases, as well as lust, and one will be able to live enjoyably. However, perhaps because of becoming used to the situation, just like people who experience an unpleasant feeling if they don't bathe every day, they end up feeling awful if they don't have their entire body licked all over by the akaname every night.

In line with their true nature, they obsessively and persistently shower the man they recognize as their husband with affection. They love to wrap each others' bodies together. Of course, they like to have sex, wrapping their arms and legs around a man's body, and wrapping their vaginal walls around the penis. They're ravenous, and they want more than just the member, for even while spirit energy is being poured inside their womb, they'll wrap their long tongue around a man's body and his tongue, sipping sweat and filth along with semen, hungrily tasting their husband's body.

Also, the act of intertwining tongues is one of their biggest displays of affection, equivalent to sex. Given the chance, they'll slip their tongue into their husband's mouth along with a deep kiss and lick every inch inside while wrapping their tongues together, melting their husband's rational mind.

This time as well, it's “akaname-san” from Zipangu. Her image is sort of a sticky loli, or a sticky loli hag! At a glance, they don't look any different in form from humans, but they have a long, thin tongue as a distinguishing characteristic. It seems their strongest skills are tongue jobs and deep kissing![1] 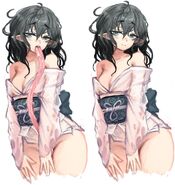 Retrieved from "https://monstergirlencyclopedia.fandom.com/wiki/Akaname?oldid=1208117"
Community content is available under CC-BY-SA unless otherwise noted.