Alps are a succubus-type monster girl with a very unusual origin: monsterized homosexual men and those who yearned to become women. If such men become incubi from exposure to demonic energy, the dark magics respond to their desires by turning them female. Although alps may begin their monster lives looking rather androgynous, by feeding on enough spirit energy their transformation can turn them more feminine and lascivious than even a regular succubus.

Alps are actually not the only, or even the first, monster girls that arise from gender transformation, as skeletons can be created from both male and female remains.

A peculiar kind of succubus, unlike any other kind of monster. They were originally incubi who suddenly transformed into monsters. Normally, a human man can never become a monster. As of the present, there are no males among the monsters at all. When it comes down to it, an incubus is just a human warped by demonic energy. Due to the existence of spirit energy, which human men continually produce, no matter how strong the demonic energy that's imbued in their body, human men remain human.

Alps are incubi that, deep within their heart, strongly desired to become a woman or be with a man, and used the demonic energy taken in upon becoming an incubus, which is normally used to boost their spirit energy generation facility, to instead destroy it. As a result, they're unable to produce spirit energy and they lose all of their spirit energy. Since they are left with only demonic energy stored in their body, they change into a monster. Even after becoming alps, their heart, values, memory, and personality, everything other than their bodies, is still the same from when they were men. Their body has completely changed into that of a woman, yet they self-identify as men. They may not even be consciously aware of the desire to become a woman which changed them into an alp, or they may have been in denial, with the truth hidden away deep within their heart.

Thus they are shocked by the radical physical change, and there's a huge gap between it and their male hearts, which likely confuses them. Most of them would probably say "Having sex with a man like a monster is disgusting. Impossible. I hate this." However, once the monster's instinct begins to take root in their heart and body, they'll naturally be drawn to human men. The monster's instinct within them makes a rapid change, becoming bigger. The feeling of dissatisfaction due to not having obtained any spirit energy will become unbearable, and they'll begin to strongly desire a human man. Eventually, they'll surely end up losing to the monster's instinct.

Once that happens, in a horribly confused state due to the gap between disgust and desire, they'll assault a man and have sex with him. When alps first taste the pleasure that human women and monsters obtain, which is so intense it's incomparable to what a man can experience, they may almost lose consciousness while shaking their hips without knowing what's going on. When the man's spirit energy is released and they experience ecstasy, they become enthralled by their first taste of female pleasure and the taste of spirit energy, which will be sweeter than anything they had ever eaten until then. They'll likely still be confused by the feelings in their own heart: "The man before my eyes wants more.", "I wanna have sex more." Then, when the heart of the man mixes with the pleasure of a monster inside their head, while spending days in want, they'll end up attacking and having sex with a man again. While repeating this, eventually they'll lose all resistance to having sex and making love with men while still completely retaining their own self-awareness as a man even though they used to say they hated it so much. On the contrary, they'll come to seek sex on their own and enjoy the taste of pleasure and spirit energy.

They were friends with other men before becoming an alp. Even after having sex over and over and completely falling in love with their human male partner, normally, they'll still treat him as a male friend, no different from how it was back in the old days. And then, they'll start to tempt and have sex with the man as if it were a matter of course, with the same feeling as inviting another male friend to hang out.

Additionally, there are also alps that awaken to the joy of being a woman through this process. In that case, their body changes, rapidly growing voluptuous to invite men and their heart changes to be like that of a woman, resulting in an alp that's even more feminine than a real woman and even more lewd and lustful than a succubus.

A boy having a fun conversation with his best friend. At this point, he's probably not even aware of the love for his friend hidden within his heart.

T-T-This isn't weird, right!? G-Getting off your best friend is a n-natural thing, isn't it!? …..Ah! This thing of yours... smells so good.... ♥ -- Even though she's bewildered, she's a monster, and the way things would turn out was probably determined from the beginning.

Hey, I've become a girl for you? So why not use me more? For your sake, I'll change myself to suit your tastes even more closely ♥ I'll become a much, much naughtier girl ♥
Add a photo to this gallery 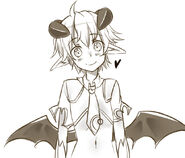 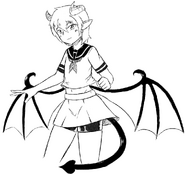 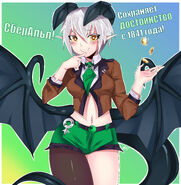 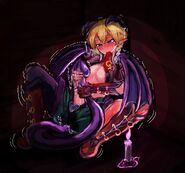 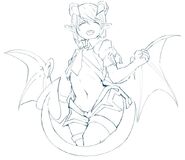 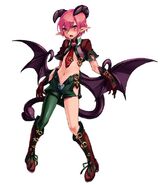 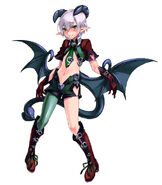 Retrieved from "https://monstergirlencyclopedia.fandom.com/wiki/Alp?oldid=1209716"
Community content is available under CC-BY-SA unless otherwise noted.