Alraune are forest-dwelling plant Mamono. They're rooted flowers, which mean they can't chase down men; they rely instead on sweet scents to bring their victims to them. Alraune nectar is widely used in demon realms as a food, as an aphrodisiac, and as a beauty treatment; so these monsters' secretions are always in high demand - especially from grizzlies and honeybees, who steal them by having sex with the unresisting plantgirls.

If they happen to find themselves living in a pro-monster or demon realm town, rather than out in the green wilderness, Alraune often wind up with the apparently odd career path of working in confectionery shops [1]. This is because of their honey, and also their knowledge of plant cultivation for prisoner fruits, meaning they're very helpful when making desserts.

Alraune are one of the few species that don't gestate their children at any point; instead, impregnation enables them to produce seeds, which they scatter after winter. Although Alraune are now all female, they still produce pollen too, as a hangover from the era of the Former Demon Lord, which can trigger (sexy) illnesses in women that breathe it in: Alraune pollen allergy. The Alraune have a mutant subspecies, the Liliraune, where two female bodies grow inside one flower bulb.

A plant type monster with the form of a beautiful woman covered in enormous flower petals that inhabits forests. Normally they don't move around very much. They're always releasing sweet fragrances that attract human men, and they wait for their prey. This fragrance is released from their bodily fluids, and the fluid is called "Alraune Nectar". It acts as a powerful aphrodisiac and stamina enhancer.

When male human prey approaches, they use their vines to bind him, and drag him inside their flower. And then, once inside, they have sex with the man after making him drink plenty of nectar, and they savor the man's semen, which is their treat.

Afterwards, men who they are fond of will always be inside the flower, continuing to be joined with them, almost as if the men themselves had become part of the alraune. The inside of the flower is overflowing with their nectar. Since the man's lower body is always being soaked in nectar, his penis can always be swelling inside the alraune, and the man himself never runs out of lust or stamina.

When it grows cold, alraune will close their petals and endure the cold until spring. In this case, an alraune with a man will store up enough nutrients necessary for reproduction and for keeping her man alive by then. While her petals are closed, she keeps having intercourse with the man repeatedly in order to produce seeds.

As for their nectar, besides forcing the men they capture to drink it, it is also treasured by other monsters. They're especially often attacked by the honey bee which mainly feeds on nectar. The honey bees will go to the alraune's flower and gather nectar almost like they're having sex, but the alraune do not resist. The reason why is that by having sex with honey bees, the alraune's nectar ripens, and releases an even sweeter fragrance, which is then even more attractive to human men.

The brains of men who smell them are stimulated, and they end up heading towards the fragrance, but they will find a hot and bothered honey bee and alraune covered in nectar, and then they'll be attacked by them, and the man will have sex with them furiously while getting covered in nectar. 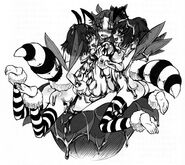 A figure of an alraune that took in a man. They're always making nasty watery sounds. With the stamen and pistil together and joining again and again, at last they've become one flower. 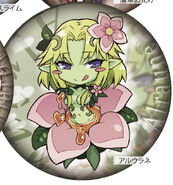 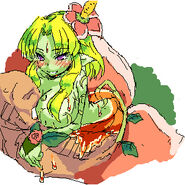 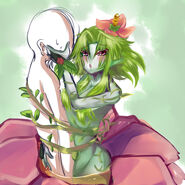 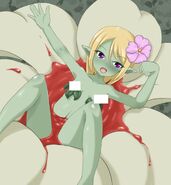 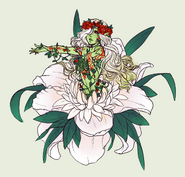 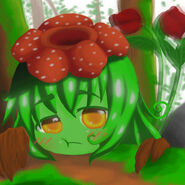 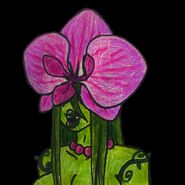 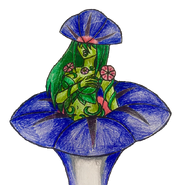 Lily of the Valley Alraune (by Mihai) 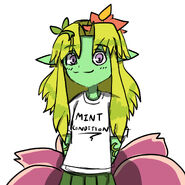 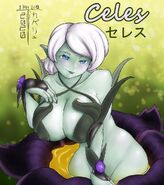 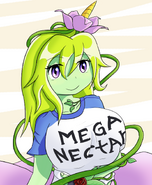 by coral_sky0826
Add a photo to this gallery

Retrieved from "https://monstergirlencyclopedia.fandom.com/wiki/Alraune?oldid=1210055"
Community content is available under CC-BY-SA unless otherwise noted.