Angels, like the valkyries, are celestial servants of the gods and are not naturally counted amongst the monsters. However, like elves, dwarves, and fairies, they can be twisted by exposure to demonic energy into nymphomaniacal, monster versions of their original species.

Non-corrupted angels count as lesser divinities, and they live in Heaven, in the castle towns of their patron deity [1]. Angels' duties depend on the nature of the specific god they serve; for example, Eros' angels visit humans for romantic purposes even without succubus influence.[2] But in general, angels' most common duties are to serve as messengers. Committed to the Chief God's teachings, angels are merciful creatures with a profound distaste towards lust and violence, although they may pick up a sword for the sake of smiting monsters.

Corrupted angels, however, slowly lose their aversion to lust as demonic energy worms its way into their thoughts, and they become selfless sexual partners to human men. They are one of the few, if only, monster species not actually motivated by their own sex drive; rather, they believe that fucking men senseless is part of their holy mission, to bring joy to the world. However, should they become aware of their own desires, they might transform into a Dark Angel.

Servants of god with beautiful white wings revered by the Order of the Chief God. They dwell in Heaven, and rarely visit human settlements as messengers of god. Aside from that, it is said that they sometimes accompany the church on monster-slaying expeditions. Since they faithfully uphold the teachings of god, they're abstemious, and extremely negative towards human desire and monsters. For that reason, they're merciful, with a fundamental distaste for fighting, yet they will still make an effort to mete out punishment in the name of god.

They were not originally monsters, but those who've been violated by the succubus' energy and have started to seek human men are treated as monsters. Angels have innate divine protection. Due to this, they have resistance to demonic energy, and they don't completely change into a succubus. The horn and tails normally seen in succubi will not grow, but their mind becomes warped after being thoroughly violated by succubus energy. The god they serve, and the god's teachings... everything in their head grows vague, and they become positive towards human desires and monsters. Because of the succubus' instinct that desires human men, they'll end up frequently visiting human settlements.

The original role of angels was to reward humans with happiness for performing good deeds, but once they receive a succubus' energy, they're imprinted with the notion that feeling pleasure is the ultimate happiness for human men, and they'll attack and have sex with a human man who strikes their fancy in order to make him happy. They treat the humans they target with extreme devotion, but like other monsters, it's half one-sided, and they won't take no for an answer. Once they obtain a human man and have sex with him, their mental conversion into a succubus progresses at once. Their recognition of god and her teachings that had barely remained will be pushed out by their feelings for their beloved man, which will occupy a majority of their mind.

They have a duty to make people happy, and when they first realise that they could use their own body to make men happy, they experience shock and joy. And then, they'll offer their chastity to the man they love as if they had completely forgotten the teachings of god that regard lasciviousness as bad, and purity as virtue, and they'll try to make their man really happy by moving their hips lewdly like a succubus.

They aren't aware of their own sexual desire. They believe that the only reason they're having sex with a man is to please him. But, for whatever reason, when they realise they do seek pleasure themselves, their mind has already changed into something obscene, and they badly desire to have sex with the male body, they completely change into a succubus, and transform into a "dark angel". 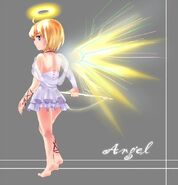 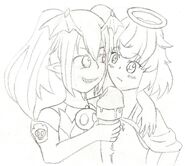 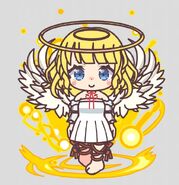 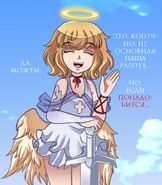 by Adeline_Leona
Add a photo to this gallery