Ant arachne are a race of lazy, freeloading Monster Girls who live as social parasites in giant ant hives. Since they look like ant girls, they can infiltrate their underground homes and steal food and mates from their industrious hosts. Ant arachne are rarely seen above ground; human men are only likely to encounter them by being poached a second time after already being taken by giant ants.

A small bug type monster of the arachne family, it bears a remarkably close resemblance to the "giant ant". This mimicry serves to fool the giant ants into thinking the "ant arachne" is one of their own kind. The arachne take advantage of this by mixing in with groups of giant ants and moving into their nests. Despite their resemblance to the giant ant, their disposition is very different, being quite ferocious in nature.

As for food, they eat what the ants gather, and they hardly ever leave the nest, so one rarely encounters them above ground. They obtain a man as a reproductive partner in much the same way. When the giant ants bring a man back to the nest, they'll seize the man and carry him back to their own bed. Being exposed to the giant ant pheromones that pervade the nest makes them highly aroused and extremely lustful. They join with a man after binding his four limbs with the thread they spit out, and they like to firmly seize a man's hips with their arms and all their legs before slamming their own hips into him.

It's not over after the man ejaculates. They're constantly exposed to pheromones, and they won't be satisfied just having sex once or twice in a row. They enjoy pleasure and milking semen by having sex again and again and slamming their hips together for as long as they like. They can't release pheromones like giant ants can, but the ants' pheromones stick thoroughly to them, and when a man sees the obscene effect it has on them, it will likely be impossible to suppress his desire.

Unlike giant ants, they don't work all day. After capturing a man they have a lazy lifestyle, having sex with the man in their bed all day and night. The reason they have no need to work is that the men who become their husbands are the same as them. They rapidly grow corrupt along with them, and eventually the priority in their head will be thoughts of having sex with them.

So if an Ant Arachne that slipped into a Giant Ant nest gets her cover blown, what kind of actions against her will occur?

They actually don't really care. But even if “Oh so is that! Well that's fine!” is also the case, there might be some individuals that “get to work!” would want to do something like turn her into some sort of maid. 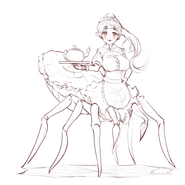 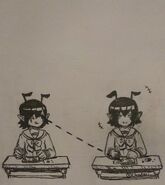 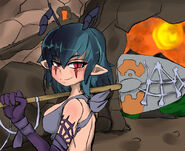 by koburatuisut
Add a photo to this gallery

Retrieved from "https://monstergirlencyclopedia.fandom.com/wiki/Ant_Arachne?oldid=1163273"
Community content is available under CC-BY-SA unless otherwise noted.