A variety of abyssal monster that lurks deep underground where light doesn't reach. The illustration depicts a married individual, and an unmarried individual would appear like a female that gives a sharp impression with only four spider legs growing on her back. They do not stray outside their own territory and are focused intently on continuously building a spider web ad infinitum, but sometimes, human men who will become their prey show up underground, as if lured by something and finally manage to reach them.

The venom that flows inside their body adversely affects even their own spirit, making them depressed, and so they are constantly irritated. For that reason, when a man with a peculiar mentality is sexually aroused by their appearance, as if to vent their irritation, they react in a manner unbecoming of a monster and hurl abusive language at him such as “lowest scum”, and will attempt to bite and inject him with venom. The effect of the venom in a man doesn't cause irritation, instead, it incites wicked carnal desire towards the little girl in front of him. A man's spirit will become depressed, and a change will come over him so that he'll have no qualms about shutting them up by screwing his penis inside their mouth, the source of the abusive language, or pinning them down on the ground and violating their tiny body according to his own desire.

While having sex with them like that, the man will experience a burning sensation inside his own body, and before he knows it, he'll have changed from human form into an ominous huge spider form. The huge spider has a reproductive pouch with countless wiggling tentacles around the bottom of his cephalon; furthermore, he will make the foul-mouthed little girl's body sink inside there and cover her in tentacles. All of the tentacles are endowed with erotic sensitivity and a sense of taste to relish her body, and semen will be released from every one of them to impregnate her; they will be screwed inside every single one of her orifices. and her whole body will be completely stained cloudy white.

Additionally, irritated by her insults, the huge spider will bite her body, and directly inject a bodily fluid through his fangs that contains a high concentration of the man's mana which will mix with her blood and violate her body from the inside, continuously providing her with irresistible pleasure; she'll convulse, constantly climaxing over and over, and each additional thrust of a tentacle will yield yet another climax. During this, her abusive voice will fall silent, and instead, she'll just keep uttering sweet words and apologies for her insults. This is because she is expressing her original personality after having the venom that was adversely affecting her spirit neutralized by the man's mana. Only when their body is filled with their husband's mana is their heart able to feel at ease. When their husband's mana that was poured inside their body weakens, and their venom gets stronger, they'll once again hurl severe insults at their husband, inciting him to bite and violate them again.

Once they’ve obtained a husband who serves as half of their own body in this manner, they constantly spend their time inside the reproductive pouch, absorbed in the work of expanding the couple's love nest by earnestly spinning thread while having intercourse with their husband. It's said that as long as this is not interrupted, they won't take any interest in any person other than their husband. There's a legend that says when this web is completed, the world will enter a time of destruction, but according to another theory, the web is a giant magic circle, and when complete, the entire surface area existing above it will be transformed into an abyssal mamono realm, and all the humans will transform into their minions.

As expected, the appearance of unmarried and married individuals differs greatly, and the illustration is of a married individual in a state of being joined with her husband. They have venom and will spew venom such as “You're the lowest scum!” at men, which is rare for a monster girl. 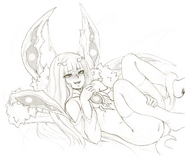 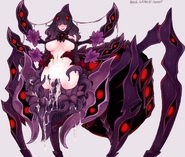 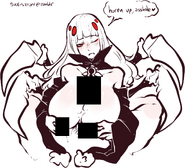 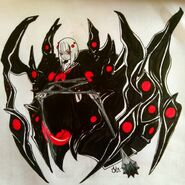 Retrieved from "https://monstergirlencyclopedia.fandom.com/wiki/Atlach-Nacha?oldid=1165712"
Community content is available under CC-BY-SA unless otherwise noted.