A mysterious plant-type monster that is said to grow fruit with the form of a sheep. Inside the jelly-like flesh of the fruit is a sheep beastman covered in fluffy cotton wool. The monster uses it to absorb Spirit Energy which it feeds on by tempting a human man and having sex, and after fertilization, it produces seeds.

During their mating season they release cotton fluff from their body that's light enough to be carried by the wind. When the cotton fluff drifting in the air reaches a man, their sweet fragrance and thick Demonic Energy contained within burst all around, acclimating a man's mind and body with the fragrance and energy of a barometz. Regardless of them secreting less nectar compared to their ancestral progenitors, they're able to carry their own scent and demonic energy far away to reach men in this manner. On this occasion, a man won't go wild with lust on the spot and immediately rush off to find them, but he'll strongly desire the fragrance imprinted in his brain, and become able to sensitively sniff it out, and naturally he'll be drawn to the source of the fragrance which is their main body.

Eventually a man's body will react sensitively if his nose catches even a hint of the fragrance emanating from their main body, he'll journey to reach them while feeling intense passion even though he has yet to lay eyes on them. They'll take men enticed in this manner into the flesh of the fruit, submerging their lower body and joining with them. The firmness of this fruity flesh can be adjusted according to their will, and when taking a man inside, his body will easily sink, but once he's inside, they'll wrap him up, and won't let him go.

Even if a man tries to pull his hips away, the elastic, bouncy flesh of the fruit will push him back, and naturally his hips will crash right into her hips.

If he tries to move even the slightest bit, his hips will bounce because of the flesh of the fruit, and if he moves violently he'll be knocked by a rebound of the fruit that is accordingly powerful in return. Once this happens and their hips slam together, both their hips will then rebound, and their hips will be slammed together again and again. As this repeats, they will end up having continuous sex. The man won't be able to stop his hips from bouncing with his own will, and every time his hips crash into hers he'll be attacked by a burst of pleasure.

The exquisite cotton that can be collected from them remains fluffy no matter how much time passes, and it's possible to pack it without the fragrance and demonic energy leaking out, and without it deteriorating. The fruit surrounding them also has an exquisitely sweet taste. Both are highly popular and in high demand, but their husbands have unanimously claimed "her body is even better". It may just be that they're enthralled from having sex with them, but their body is always soaked in fruit juice. Their juice-soaked body is also as soft and vivacious as the flesh of the fruit, and just licking it causes a thick sweetness to spread through the mouth. It's said that the juice dripping from their body, and the bodily fluids they secrete are sweet nectar of the finest quality.

Their husbands enjoy more than just intercourse, and many become engrossed in licking and slurping all over every inch of their body, as well as sucking their lips and intertwining tongues in order to sip the fruit juice that accumulates inside their mouth. There is unanimous agreement about how delicious they are, but since licking their body and kissing them is something they strictly only permit their husbands to do, tasting their body is a privilege reserved for their husbands.

It's late, but happy new year!

Please stay tuned to kurobinega and monster girl encyclopedia this year as well!

And so, since it's the year of the sheep, the first monster girl of the year is... a sheep-like plant monster, “barometz”.

It's a mysterious alraune family monster girl with a sheep girl inside a fruit... or rather, a sheep fruit attached, and they can also take a human man inside their fruit and go at it with him.

It seems they can pull out their roots and move like other alraune, or move by bouncing, but when a barometz with a husband moves, it seems to cause terrible things (in a sexual meaning)! I drew it while thinking of stuff like that! Ehehe.[1] 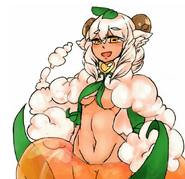 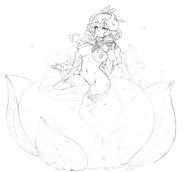 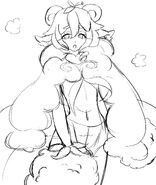 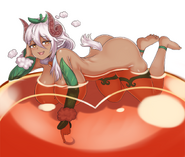 by Nav
Add a photo to this gallery

Retrieved from "https://monstergirlencyclopedia.fandom.com/wiki/Barometz?oldid=1183655"
Community content is available under CC-BY-SA unless otherwise noted.