A race of lamia that has the upper body of a woman, the lower body of a snake, and part of their body covered in plumage. Their disposition is docile and very quiet, and not only are they passive about assaulting men, they won't even get too close to humans. They dwell in quiet locations where there are no signs of people.

They have evil eyes with dreadful venom that will ruin a person just from being exposed to their gaze. This extremely potent venom relaxes all the muscles in their prey's body, rendering them unable to move; at the same time causing the prey to heat up with a feeling of ecstasy equivalent to the burning sensation of a monster in heat, and the prey becomes unable to think clearly.

Furthermore, the spirit energy inside the prey's body is distorted. The distorted spirit energy leaks from the body much more easily, and when it spills out the penis swells so much that it looks ready to burst. Even the slightest stimulation will cause a release of semen as if a dam had been broken. Along with this, it makes it easier to absorb demonic energy into the body, so it results in a state where conversion into an incubus or monsterization can easily occur.

Moreover, the distorted spirit energy is as virulent as the basilisk's venom, and even newly produced spirit energy will be converted into venom that violates one's own body. For that reason, for detoxification, it is necessary to have all the venom sucked out, or have all the body's spirit energy sucked dry in one session at the hands of a monster. It is said that in the age of the former demon lords the basilisk's deadly venom was such that it could kill a human in a single glare. Monsters no longer rob humans of their lives in the current era, but still, if a human's spirit energy is completely sucked out for the sake of detoxification, they will certainly be transformed into either an incubus or a monster. So the fact that it brings about the end of one's life as a human in a single glare probably hasn't changed.

In this manner, they do possess powerful evil eyes, but they can't control them too well. For that reason, they always hide their face with something such as a mask to seal the power of their evil eyes. With their normal vision obstructed, they instead use heat sensing and spirit energy detection in place of their field of vision. The mask also has the role of making it so that they won't confirm a man by sight.

This is because should they directly catch sight of a human man, they would become unable to control their love and desire for the man, and end up going wild and attacking him. With their evil eyes exposed, even if they can't control the power of their eyes, they follow their monster instincts unconsciously and direct their deadly venomous gaze towards a man. A man will be reduced to mere prey waiting to be eaten as they coil their serpentine lower body around his body. After entwining their womanly body and gluing both bodies together, they will persistently copulate over a long period of time until all the man's semen is milked dry and the venom is removed.

While their hips are glued together and semen is being released, they will continuously gaze at the man, who has gone from being their prey to their husband, with their evil eyes full of obsession in a manner befitting of the lamia family. And then, they'll fill their husband's body with venom imbued with their love, and ruin him with the pleasure of ejaculating within her incessantly.

They possess dangerous evil eyes, but as long as no unforeseen accident occurs, luckily, they almost never take off the mask themselves. Before they take off the mask and lose control of themselves, they do have weak points as well. If they sniff a man‘s body odor from up close or have a man whisper in their ears, they will turn bright red and collapse. According to them, it seems “the stimulation is too intense when wearing a mask."

This time's monster girl is 「Basilisk」. According to legends, they may have been snakes, lizards, or chickens, but in the encyclopedia world they've become a race of the lamia family. In the source material, the basilisk possesses such terrifying power that it could kill “just by gazing at a person,” but even in the encyclopedia world, they possess evil eyes that can bring about instant death (in a sexual sense). Normally, they wear the mask to suppress that power.[1]

TL Note: Unlike the medusa, it is not clear if one has to look into the eyes of the basilisk to be effected by their power. The mechanics of the "venom" transmission are also unclear. 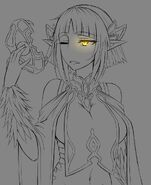 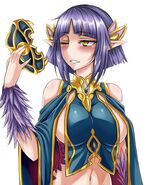 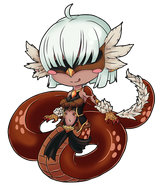 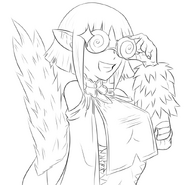 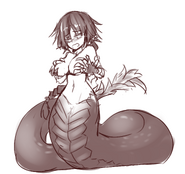 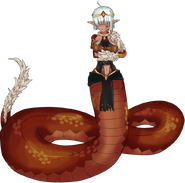 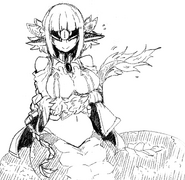 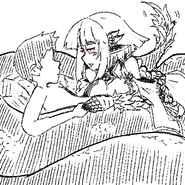 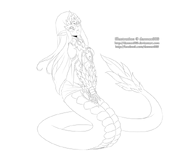 Basilisk Bride (minus visor) by Midnight 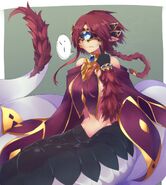 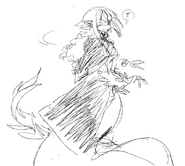 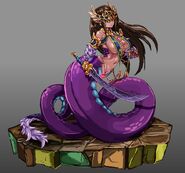 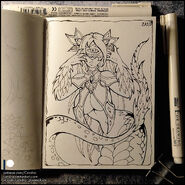