Omnivorous, will eat almost anything, has a preference for human fluids

A bug type monster also referred to as "Lord of the flies." Their body is small, but they possess tremendous magical energy and they fly around the sky at high speed using the wings on their back. They're also called "Lord of gluttony" and their lust and appetite are extremely ravenous. They're dangerous monsters. Whenever they see food they devour it all and whenever they see a human man, they attack and try to forcibly have sex.

They're capable of eating anything, but what they most prefer is the sweat, saliva and semen of humans. To them, human men are a treat that is prioritized above all else. If there's a man in front of them, they'll thoroughly lick up the sweat all over his body, thrust their tongue in his mouth and greedily slurp his saliva and suck his penis, gulping down the semen resulting from the ejaculation induced, all with an ecstatic expression.

They're so ravenous as to be regarded as lords of gluttony, so of course they aren't satisfied by just having sex once. If they take a liking to a man, they'll stay in the area, flying around him, frequently attacking the man in pursuit of sex.

In this way, they are extremely dangerous monsters, but they're also symbolic of a bountiful harvest. Once they've taken a liking to someone, no matter how much food is devoured by them, even more food and wealth will be accumulated. No matter how much one has sex with them and releases semen, he'll never run out of stamina and lust and he'll instead become able to fire even more semen at them.

They're extremely selfish and they eat when they feel like it and attack men when they feel like attacking. Even if one objects to what they're doing, they generally won't listen at all and instead, you'll be pushed down on the spot and be deliciously devoured.

Since they're drawn by the scent of food scraps and the odor of human sweat, etc. if you don't wish to be attacked, you'd best keep yourself and your surroundings clean. The odor of sweat which is normally regarded as foul, is the fragrance of the greatest treat to them. It does none other than stimulate their brain and lower body, igniting their desire.

[1]
Add a photo to this gallery 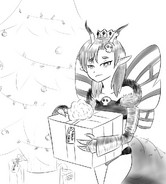 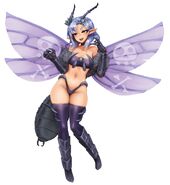 Retrieved from "https://monstergirlencyclopedia.fandom.com/wiki/Beelzebub?oldid=1162573"
Community content is available under CC-BY-SA unless otherwise noted.