Though wildly lustful, Bicorns do not forcibly rape men, but they are adept in the ways of arousing lust in men. Men that they go after will be unable to resist their sweet temptation, and will eventually have sex with them. Exactly opposite of the monogamous Unicorn, it’s in a Bicorn's nature to prefer a polygamous harem arrangement where their husband has many monsters as wives. As far as they are concerned, their husband becomes a more lustful, hedonistic existence by having sex with many monsters. Also, letting many women know the taste of their beloved husband brings them more joy than anything else. Additionally, their husband’s spirit energy, which gets mixed and corrupted with the demonic energy of various monsters, becomes like a cocktail, and it is said to be a Bicorn's favorite treat.

Normally, the demonic energy monsters pour into a male asserts that he belongs to them, and functions to repel other monsters. However, the scent of a male’s spirit energy infused with a Bicorn's demonic energy ends up becoming thicker and stronger, which causes him to become extremely attractive and delicious looking to other monsters. Just the opposite of other monsters, the Bicorn's demonic energy attracts other monsters to their husband. Of course, this goes for the woman who caused a Unicorn to become a Bicorn, but if there are any other women whom her husband desires, or vice-versa, she’ll train them into lascivious monsters that are appropriate partners for her and her husband, making them a member of the harem for the husband’s sake.

Even should their husband be resistant towards the idea of a harem, she’ll lure him into it by sprouting the seeds and fanning his desire for other women. Additionally, every time a new monster joins the harem, the Bicorn's demonic energy grows relatively thinner, so there is a limit to the number of members, but it’s probably easy to make a small scale harem of about 5 or 6 people.

If you create a harem with your Bicorn wife, can you add a Wisp to it?

It is possible. When the second wife tries to monopolize her hubby by imprisoning him in a cage, the other will probably be very excited by the excitement of watching their sex.

Harem of collar cover
Haremofcollar sample1.jpg
Add a photo to this gallery

Artwork by Sudeo
"hold my hand tightly please. them I will become completely and exclusively yours." 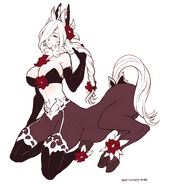 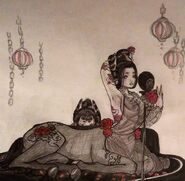 Unicorn (heh) from Azur Lane as a bicorn by Yamakiri

Hellhound-Bicorn hybrid by AltairLeVega
Add a photo to this gallery