A race of harpies that have charming onyx wings. Although they are a clever race, particularly having the highest intelligence of all harpies, on the other hand, they are exceedingly belligerent and ferocious. It's even said that they attack humans, robbing food, as well as precious metals, gemstones, and the like, which they have a penchant for.

Unlike harpies, they'll aggressively abduct and violate human men even when it's not their breeding season. When hunting, they aren’t merely driven by the urges of breeding season, instead attacks are calculated in a cunning and meticulous manner. Word has it that sometimes they even flock together and attack groups of men.

They are extremely lustful towards their mate and become obsessed with him. After bringing a man back to their nest, they spend their time nestled closely, making love, and they enjoy aggressively copulating. Due to their strong temperament and aggressive nature, intercourse is furious and they usually take the lead most of the time, but on the other hand, contrary to harpies, they lose their ferocity when it becomes breeding season, and their usual boldness then dies down.

When breeding season visits, their mind and body are dominated by the uterine urge to seek a male and get pregnant, and the sense of pleasure and fulfillment that they experience during copulation is amplified by leaps and bounds to the point that they can no longer maintain their composure while enjoying it as they usually do. They’ll start fawning on the male in pursuit of the joy of a female and beg for intercourse.

Black harpies have a strong sense of camaraderie, but on the other hand, they are exceedingly wary of those who aren't friends. They threaten those who approach their nests in an intimidating manner. And if one of their friends is harmed, a flock of black harpies will rush the foreign enemy all at once. They treat their mates and children with especially great care, and if someone were to harm their precious family, at that very moment, that someone would be making an enemy of all the black harpies. If looks could kill, then the sharp looks that would be coming from their countless pairs of shining eyes would do it, and a black swarm vicious to the point of ruthlessness would engulf the enemy.

On the other hand, they genuinely smile sweetly and lovingly at their family, and express affection by gently wrapping them in their soft black-feathered wings. 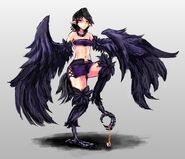 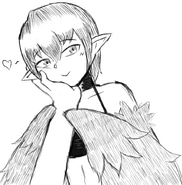 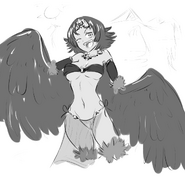 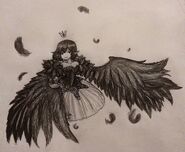 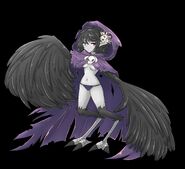 Retrieved from "https://monstergirlencyclopedia.fandom.com/wiki/Black_Harpy?oldid=1162605"
Community content is available under CC-BY-SA unless otherwise noted.