Bubble slimes are probably the gloomiest members of the slime family. Making their homes in dank caves and the sewers of human settlements, they hunt for semen to eat just like their basic cousins. Alas, they are both slower and rather more malodorous than the other slimegirls, meaning you can smell them coming a mile away and make a quick escape.

The bubble slime's scent comes from the bubbling chemical reactions that are constantly happening in their body, which actually effect a purification of the toxins they encounter in their environments - meaning, ironically, that they're probably the cleanest thing in their vicinity. In fact, jelly made from the bubble slime's goo is considered an exquisite delicacy in the Demon Realm Traveller's Guide.

Although bubble slimes are slow, if they do catch you, they have a cunning method of ensuring you can't get away from them (or at least not for long). The first technique on attack is to force their victim to swallow some of their jelly with a kiss. It's an extremely addictive aphrodisiac, so it tends to discourage escape.

A type of slime that lives in dark, wet places like sewers and caves. They are intelligent enough to speak human words, but their thinking processes are extremely simple. Guided by instinct, they wander in search of prey.

They produce a strong odor from their liquid bodies, so one will likely know right away when they’re close by. Their bodies are always carrying out chemical reactions, which cause pieces of them to be released into the air as bubbles. Perhaps due to this they need to eat a lot more than an ordinary slime to sustain their bodies, and in turn are extremely greedy.

When they find a man, they attack him, and through something similar to sexual intercourse, try to take in his semen, but compared to ordinary slimes they’re not as sticky and move much more slowly, so they’re not very good at holding their prey down, and it tends to escape before long. Because of this, they first perform something like a kiss on their captured prey, and pour some of their own body inside his mouth. The body of the bubble slime has an aphrodisiac effect when consumed, and it is extremely addictive. Due to this, prey that has been swallowing it will likely begin to greatly desire the slime’s body. If only a little is swallowed, the effect will go away after a short time, but if a large amount is imbibed, the prey will become strongly dependent on her body, and the odor will start to become an extremely pleasant scent to him. If this happens, then it’s already too late, and the man will likely no longer be able to live without the bubble slime.

Also, it’s said that they produce an offensive odor because they live in terrible environments. Their bodies take in toxins, convert them into harmless substances, and release it. For that reason, if you take them out of the sewers or other such areas, and live in a clean place for a while, their foul odor will completely disappear. Once the foul odor is gone, they release a good scent that’s surprisingly distinct. The odor sensed by men who become dependent on bubble slimes is likely a powerful version of this.

Refer to: Herbs and other foods and Bubble Slime Jelly

An exquisite product, with the perfect balance between sweetness and sourness. The aphrodisiac compounds are highly addictive, and if a human man consumes this, he'll be headed straight for a future as a bubble slime's husband.

Considering where they live, at a glance, it might seem like there may be some health concerns, but they concentrate all the toxic waste and filth that sticks to their body in the excess portion that touches the ground, and they always take care not to let poison or filth reach their beloved husband. Also, since they keep the stuff they feed to their husband especially clean, there are no health concerns. However, in case one were to collect it without them knowing, there is a possibility of getting the part that's concentrated with toxins. Since eating it would wreck anyone's stomach, it's best to always try to negotiate and get them to share. 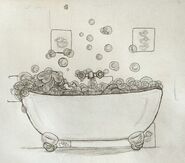 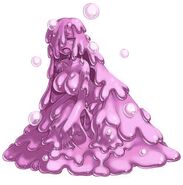 Retrieved from "https://monstergirlencyclopedia.fandom.com/wiki/Bubble_Slime?oldid=1162779"
Community content is available under CC-BY-SA unless otherwise noted.