Cait Siths are particularly monstrous beastman type monster girls. They were first mentioned in Fallen Maidens, several years before their actual profile introduction, as "kettoshii" in the section on beast monsterization. They are one of the very rare examples of monsters which can be formed by demonic energy corruption of non-sapient creatures, others being the Cu Sith and the Tentacle.

With the Cait Sith profile, also came a lot of information on a previously-unheard-of divinity, Bastet, and her realm, the Cat Kingdom.

A type of beastman born from the monsterization of cats that were once animals. Even among the cat family, these beings are especially close to beasts, their entire body is covered in fur. When a cat is joined to its male owner by a strong bond, and it has developed feelings of love for him, if it is showered in Demonic energy, it will transform into one of these "cait sith". Possessing extremely high intelligence, they have been given the duty of ruling cats along with magical power, they can even cast various spells.

Just like their outward appearance, they are closer to cats (that are animals) on the inside too. They have selfish, capricious personalities and perhaps because of having been spoiled by humans, they consider themselves and other cats to be of a higher standing. They display an arrogant attitude towards men, speaking in a manner such as the following: "If you think I'm cute, then I'll let you pat my head." "If you say you want to mate with me that much, then I'll make you my male."

On the other hand, if petted, they cannot help but purr and they naturally snuggle up to their partner to have a sniff of their scent. In this way, when it comes to the man they have acknowledged as their own male, they lose control over themselves. Their body and heart, being close to that of a beast, will react very honestly to the actions of a male. They easily go into heat when enveloped in the warmth and odor of a male, and after becoming only female beasts, they will affectionately rub their entire body against the male.

At times, they even lose their capacity for speech and will just try to mate while moaning in an alluring manner. When in heat, as females, the only thing in their heads is to receive the bestial lust of the male and become pregnant. When mating, they rock their hips to guide the penis deeper and deeper towards their womb, and it will be intense like that of an animal.

The "Cat Kingdom" created by the cat goddess "Bastet," is a cat paradise where various cat family monsters live, as well as ordinary cats. As long as men living in the kingdom obey the law and adore cats, they are promised a life with all their necessities taken care of; but the law absolutely favors cats. Men are obligated to spoil cats and to give in to their demands, whether playing with them, or mating with and impregnating them. Also, it seems tormenting a cat is considered a serious crime, whether or not it took place within the kingdom. If one torments cats and a cait sith receives a report from the other cats, she will abduct that person and carry them off to the Cat Kingdom.

One of their duties is also to punish criminals who have been brought back to the cat kingdom. If the culprit is male, then his human rights will be stripped away and he will become the property of them and their cat underlings. He will become a "cat toy" that will be played with and milked by the cats whenever they feel like it, 24 hours a day. On this occasion, they will cast "a spell to make him vulnerable to cats," such that he will become extremely sensitive to the cats' tongues and paws. If he fondled with them, he will immediately lose strength and be unable to resist the pleasure, so he will easily spurt out semen.

Eventually, by the time he has served out his sentence and become his owner's husband, he will have changed into a cat lover whose erection will never weaken when he is around a cat. He will spoil the cats and pour semen into them as they desire.

If the culprit is female, then they will cast "a spell to change her into a cat" and she will be changed into one of the cat family monsters. The new cat will have to live surrounded by her senior cats, who are nasty with a love of mischief. They will train her as much as they please and instill her body with a sense of what it is to be a female cat.

This time the monster girl is “cait sith”.

Perhaps because the race was born from the monsterization of cats that were originally animals, they're the closest to cats even out of all the cat family monsters...... or rather, they look the most bestial. They're soft and fluffy.[1] 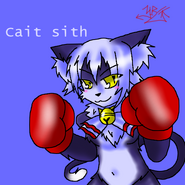 Tama from Kancolle as cait sith by [paundo]

From story [[1]]
Add a photo to this gallery

Retrieved from "https://monstergirlencyclopedia.fandom.com/wiki/Cait_Sith?oldid=1162796"
Community content is available under CC-BY-SA unless otherwise noted.