Near water, such as oceans, seashores, and rivers

Cancers are crab monsters that live near water such as oceans, rivers, etc. They have the upper body of a woman, a lower body covered in a hard shell, and one of their five pairs of crab legs have become giant pincers. Boasting freakish strength, these pincers can even twist and tear off the iron armor of their prey but are also proficient enough at delicate, dexterous movements that it is no issue to remove the clothing of their prey without ever tearing it.

When they find a human man that strikes their fancy they will, seeking sex, use their claws to seize him, and draw him near the bosom where the alluring upper body waits. Bubbles containing demonic energy will be released from the “mouth” of their lower shell, enveloping the body of the man seized. They have the peculiar habit of using these bubbles with the intention of washing a man's body by using the brush-like parts of their shell, the soft palms of the upper body's hands, and sometimes even by covering the entire humanoid part of their body in bubbles and intimately rubbing against the male's body.

This behavior is done to rub their own demonic energy into a man's body. Aside from that they also hate it when scents or tastes other than the man's get mixed in during sex, so it's said that they do it to cleanly remove excessive filth, odors, other demonic energy, etc, from the man's body. For that reason, they're especially careful about the penis so that "it'll have the pure taste of the man", and in some cases, they're so diligent and thorough that they cause men to ejaculate repeatedly in the middle of washing. Once done washing, they finally stuff their cheeks full of their favorite thing and hold it in their mouth. These actions that could also be taken as a service to the man, will even wash away the man's will to resist, and then they'll end up having sex just like that with each other's bodies bubbled up.

Also, although their bubbles cleanly wash away almost all filth and odor, and even other demonic energy that's stuck to them, they have no effect whatsoever on the husband's own scent and spirit energy. By washing themselves with these bubbles and maintaining a clean body, they seek to ensure that the only thing that covers their body is what belongs to their beloved husband.

Many individuals among them are pretty poor at expressing emotions, so instead, emotion appears strongly in their lower body's actions such as when they threaten enemies by making clattering noise with their pincers, or when they express joy or arousal by moving their five pairs of legs restlessly, etc.

When they express the most desire and fondness of all, by moving using their whole body, it appears as if they're dancing, and is called a "courtship dance". The Cancer’s pincers make a brisk rhythm, bubbles of demonic energy float around, and in the midst of the bubbles they dance, shaking their body intensely and alluringly. Men find the spectacle irresistible, and those charmed by this dance will end up getting showered in the demonic energy of bursting bubbles during the dance, and their heart will be completely stolen by the unusual dancer.

The update this time is the crab monster girl, “cancer”. In the illustration, their upper body is totally unguarded, but the front part of the shell is the opening and closing type w 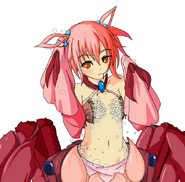 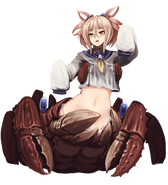 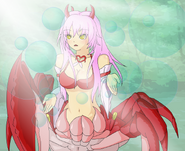 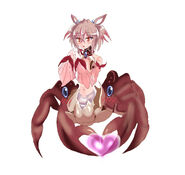 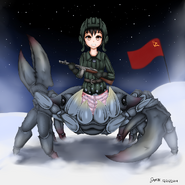 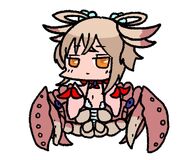 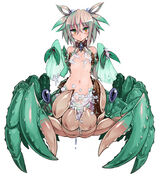 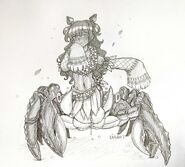 Retrieved from "https://monstergirlencyclopedia.fandom.com/wiki/Cancer?oldid=1162795"
Community content is available under CC-BY-SA unless otherwise noted.