Carnivorous, eats any kind of animal

A Beastman type monster with the upper body of a human and the lower body of a horse, most of whom live in grasslands and plains. Most of them are excellent warriors, galloping around the grasslands with their powerful legs and loins, wielding swords and bows. They live by hunting wild animals and gathering plants.

Most of them place great importance in one’s pride as a warrior, so they’re normally calm and rational. Due to this, they won’t do such things as attack humans. The centaur race has produced many heroes and sages since ancient times. This is because every member of this race has this way of thinking: “Do not sully the name of the heroes of the past.”

However, they naturally have a violent and lustful disposition. They lose control unexpectedly and reveal their true nature. In the case of extreme individuals, just being touched by a human man will make them go wild with lust, revealing their ferocious and lustful nature. In accordance with their hot, throbbing body, they’ll attack the man extra-savagely in proportion to how much they normally restrain themselves, and enjoy the pleasure and sex they wanted so badly.

They’re even more troublesome when they come back to their senses and calm down after attacking a man. When they’re calm, they have an extremely strong sense of purity, and they may have an outburst of anger as soon as they come back to their senses. They chase him around, demanding he take responsibility. However, their devilish nature, which is their true nature, says “Take responsibility”, so they can get the man, and then whisper to them, “Have sex with the man and indulge in pleasure to your heart’s content.”

They hate letting men ride on their back, and they only make an exception for the man they acknowledge as their husband. If he requests it, they’ll reluctantly let him ride, but since their body will be glued to the man’s body during this, their body will get very hot and they’ll go wild with lust.

By the time the man arrives at his destination riding on them, they’ll be totally ready for intercourse, and he’s liable to get attacked once they become unable to bear the heat and desire.

All monsters in the centaur family have another vagina, aside from the horse vagina located at their rear, which they’ve had since the era of the former Demon Lords. It’s in the front at the boundary of the human upper body and the horse lower body (In the same position as a human woman), and it was newly formed when their body changed to become more suitable for intercourse with a man upon the dawning of the era of the current Demon Lord. They can have sex with a man and become pregnant no matter which one is used. The rear vagina has also changed to become small and tight, capable of squeezing, matching the human size so it is suitable for intercourse with a human.

She'll only permit her beloved man to ride on her back, however the scent and body heat of the man felt through her back will cause her body to get hotter and hotter.
Add a photo to this gallery 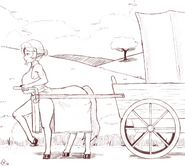 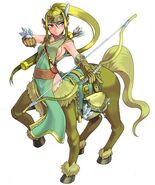