A race peculiar to Wonderland, the Cheshire Cats are the guides of this curious and lewd kingdom. The progenitor of this race was a Werecat that wandered into Wonderland and hit it off with the lady of the land, the Queen of Hearts. Because of a common love of mischief, she was given power as a servant of the queen.

Cheshire Cats are always grinning and smiling lewdly with a lustful and unpredictable personality. They love fun and lewd things, and tease those who wander into Wonderland with obscene words, whether male or female, making overt sexual overtures and enjoying the person's reaction. Their duty is to guide the visitors of Wonderland, but with their guidance, what lies ahead is a variety of curious and obscene occurrences, like sex-crazed monsters that are after the visitors, etc. They're overjoyed, and the smile on their face further deepens when they see visitors getting teased by them and they end up in sexual situations.

They have the ability to freely appear and disappear. As long as they're in Wonderland, they're monsters that can suddenly pop up unexpectedly anywhere. By the time a visitor notices, they'll be right on top of them, groping their body from behind, and making their tongue crawl all over while whispering filthy, dirty words in their ear. Words spun with the sweet, enchanting timbre of their voice somehow feel obscene and lewd even when the topic of discussion is completely unrelated to sex. When they whisper, it easily melts into the hearts of those bewildered by Wonderland.

While being shown the lewd spectacles of Wonderland, visitors will be tempted with words such as, "You want to join in, and get off like that. You're filthy, aren't you?" and even if they had no such intentions their body will grow hot and seek pleasure. Their thoughts will be consumed by lust and envy towards the spectacle before their eyes.

Then, just as the Cheshire Cat said, "I want to have sex (I want to become a monster) and get off like that" will become true inside the visitor. And then, while continuing their "tour", the visitor's values and common sense will all be stained in the color of Wonderland. By the time they change into an incubus or monster, they'll have totally become a resident of Wonderland.

Furthermore, Cheshire Cats are usually just guides, mostly devoting themselves to observing visitors. However, in the event that they take a liking to a man, they may aggressively interfere in order to make the man their own husband. They'll enjoy sex with the man during obscene occurrences and gradually stain him completely in the lewd color of their preference.

After obtaining a husband they become even more lascivious. Life with these happily smiling girls is full of pleasure and absent of boredom and agony in spite of their teasing. Also, sometimes they become playful with men and exhibit cat-like behavior, which is different from how they normally are, but they only show this side of themselves to their husband.

The monster girl this time is the guide of 'Wonderland', Cheshire Cat. It's the debut of a new setting in the encyclopedia world, 'Wonderland'. The adventures of Alice-chan (and the men who are their victims) begins now....! The specifics details of 'Wonderland' are lengthy, so please reference this [Link to the Wonderland settings/details]. It's their (Cheshire Cat's) duty to guide travelers who wander into the curious and lewd 'Wonderland', but along with their permanent grin, they tease and sexually harass visitors regardless of whether they're male or female. They pretty much do as they please. But still, it seems they do properly guide people. However, there's only one thing that awaits them...[1]

Cheshires are well-known for teasing males, but are there any cases where they have fallen for specific male so profoundly that they're unable to tease him? 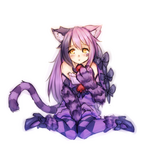 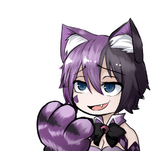 A chibi Cheshire.....the name says it all. 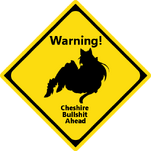 Some CheshireCat Just Want to Watch the World Burn by BWSNOWY 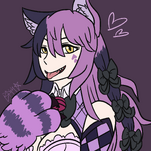 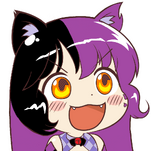 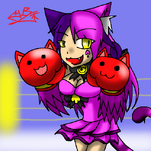 Based on [Beachside Shack Part-Timers] 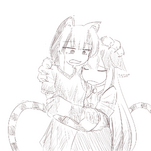 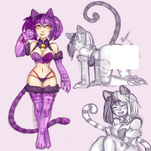 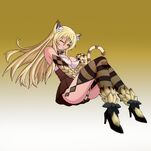 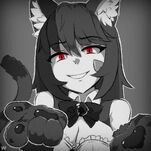 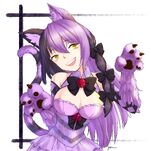 by Fellm
Add a photo to this gallery

Retrieved from "https://monstergirlencyclopedia.fandom.com/wiki/Cheshire_Cat?oldid=1186461"
Community content is available under CC-BY-SA unless otherwise noted.