Nearly all of the races in the harpy family have small bodies, but these monsters are especially small even for one of them. They have wings, but they're too small for even their size, so they can't fly through the sky. However, instead they have powerful legs and they can scamper across the ground swiftly.

They have extremely timid personalities and the moment they spot monsters bigger than themselves, or human men, they will run away. However, powerful pheromones that attract human men are released from the cockatrice's body, so they have a trait that contradicts their behavior. By means of this trait, cockatrices seek out men with quick legs like them in order to give birth to keen and swift children.

The pheromones they release are so powerful that men exposed to them will drop everything else and start chasing after them. If one gets a whiff of this odor, his own desire will be thrust into their tiny body and he'll be overcome with an unbearable desire to violate them. In other words, they run for the sake of getting caught and violated by men.

The moment they're overtaken by a man and he violently seizes their hips, they experience terrible fear and anxiety, but at the same time, they instinctively feel strangely relieved to have safely obtained a husband. Then the moment their hymen is torn, regardless of the coercive nature of the act, it is said that they experience profound happiness. At the same time, the anxiety and fear that they had felt until then vanishes and from then on, when the inside of their tiny body is violently stirred by the man's penis, to the moment it's screwed deep inside their womb, they're filled with powerful anticipation for the moment when spirit energy will be released inside their body. With such anticipation in their heart, while being violently raped by the man they acknowledge as their husband, they let out cries of pleasure that sound as if they're ready to burst into tears while tasting and enjoying it.

Afterward, the man will come back to his senses and when he tries to separate from them in a panic, they'll use the petrification ability their eyes are endowed with to change his hands that are strongly gripping their hips into stone right then and there in that state. As if to suggest they want him to thrust it in and violate them more, they'll weakly shake their hips.

Additionally, in contrast to unmarried cockatrices that run while releasing pheromones, those with husbands do not release pheromones and if a human man other than their husband approaches, they seal his movement through petrification using their eyes and will run away, in the true sense.

I'd like to say that it's a relief that one won't be led astray by their pheromones, but around married cockatrices lurk many other monsters that are after petrified men. These men will end up being carried off by them and thoroughly violated without exception.

A cockatrice having rigidity screwed inside from behind by a man. Regardless, even in this moment, her heart is probably being filled with joy for having obtained a husband.
Add a photo to this gallery 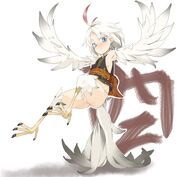 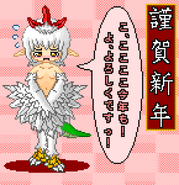 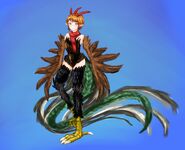 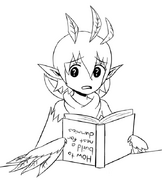 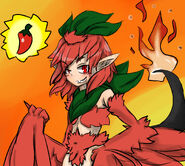 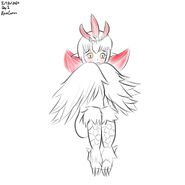 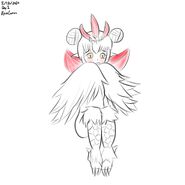 Retrieved from "https://monstergirlencyclopedia.fandom.com/wiki/Cockatrice?oldid=1181804"
Community content is available under CC-BY-SA unless otherwise noted.