A rare fruit that can only be collected in Pandemonium, the holy land of the Fallen God's faith where “Dark Priests” and “angels” live. It's covered in a blue, beautiful skin. Since fallen angels have blue skin, and the fruit appears to be shaped like a tear, they are also called “fallen angel tears”. (According to a Dark Angel acquaintance of mine, they're not tears of sadness, and they're supposed to be the tears of joy at having fallen.)

The inside of the skin is packed full of white squishy pulp with some springiness that is faintly sweet. The middle of the pulp is densely packed with little black seeds that sweetly melt in the mouth like chocolate. It's fine to eat all of it together, it's fine to divide it and eat each part separately, and it's also fine to use it as an ingredient for making sweets. So it's a very delicious product, even as a mere dessert.

But of course, what a monster would be concerned about is the effect. Monsters are creatures that live by feeding on men's mana. For that reason, they can absorb mana in various other places besides their vagina. Even so, this fruit is used to dramatically increase mana absorption through the “skin”, which is normally not very efficient for obtaining mana compared to their vagina and mouth. Pleasure, joy, and ecstasy when having their body showered with semen is raised, and they're able to thoroughly absorb their beloved husband's mana in their body without wasting it. Since the adherents of the faith of the Fallen God love getting bukkaked by their husband and getting stained with milky white stuff, they are greatly pleased with the effect. Besides that, it's also fruit that's popular with monster wives who think, “I don't want to waste even a single drop of my husband's semen!”

Additionally, the black seeds in the center of this fruit of corruption are likened with the dark angels and the clergy of the Fallen God's religion who wear black clothes, and the white flesh is likened with the desire and semen that men direct towards them. Those monster women receive their beloved husband's desire with their entire body. We can truly say that being covered in sticky white semen is the ideal form for adherents of the Fallen God's religion.

Also, if an incubus or a human man eats it, it will raise his ability to produce mana and semen, so if couples eat it together, it's a pleasant fruit for monsters that makes it so a monster can be enthralled by having her husband ejaculate semen on her until her entire body becomes pure white.

Also, this fruit has another effect. The adherents of the Fallen God who are already thoroughly corrupted can hardly even tell, but when a human eats this fruit, just as the name “corruption” would suggest, it causes the heart to swell up with lust and obscene desires. The effect will even cause a little girl with no sexual knowledge to have lust and take an interest in sex, giving her obscene fantasies. A little girl won't be able to bear it, and she'll masturbate for the first time in her life that night, being guided by the pleasure and orgasms all night long. Once the desire for pleasure takes root, it will never subside, and will only increase day by day, and the ability to control desire will also be lost. While still retaining human values, they'll be distressed by it. Sometimes they'll even feel self-hatred for being an obscene person.

However, at that time, their nose will be sensitive enough to sniff out the scent of the “corruption” that was accumulated due to the fruit. In the case of a man a dark priest or dark angel will appear before him and have sex with him with their lewd body. The voice of the “fallen god” will echo directly in the mind of a female, guiding her to become a “dark priest”. They'll awaken as a fallen disciple after being taught the following: Passion, carnal desire, and lust. Letting the overflowing sweet desires dwell in one's body is never wrong. The act of earnestly lashing out at the opposite sex with all of those desires as affection, and being stuck by them is a just and wonderful thing.[1][2] 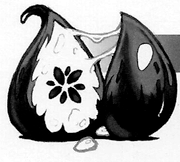 Retrieved from "https://monstergirlencyclopedia.fandom.com/wiki/Corruption_Fruit?oldid=1179418"
Community content is available under CC-BY-SA unless otherwise noted.