A type of mimic which has a shapeshifting ability. They masquerade as mountains of coins, sacks stuffed full of them, etc., and lie in wait for human male prey. They basically appear in places visited by adventurers and tomb raiders such as old castles, towers, and the like, but there are reports of them rarely managing to sneak even into places such as national treasuries.

They reveal their true forms when men who fall for the trap touch or approach their disguised body.

At this time, part of the mountain of gold coins will suddenly change into a monster with a woman's form, but men do not appear to be startled or bewildered by it. The reason why is that they have the power to tie men's "lust for money" directly to lust towards themselves. In other words, once a man has been charmed by the mountain of gold, even if it suddenly changes into a monster, he'll still look upon her as being the same as the mountain of gold he insatiably lusts for. Thus, the dazzling glimmer of gold coins is itself employed exactly as is by these monsters, as a charm to lure men. For instance, even if a man were to notice their true form before touching it, that wouldn't be reason enough to stop in his tracks or turn back, and he would still be drawn to them. If tempted by one of these girls spreading her legs, a man would probably get on top, give in to desire, and thrust his penis inside without the slightest hesitation.

The stronger the lust for money, the stronger the lust towards them, and in addition, once a man has copulated with one of these girls, he'll become highly possessive towards her, just as he is greedy with his money, and he'll start thinking that he never wants to lose her. In other words, it tends to be the case that the more avaricious the man, the more he'll smother her in love.

In response to that passion, sex with a creeping coin sates two desires, bringing about a powerful sense of satisfaction both mentally and physically. As a result, their husbands will end up prioritizing sex with them whenever feeling greedy, which is often interpreted by the people around them as a steep drop in greed; however, the scholarly consensus is that the actual magnitude of a man's desires only swells more and more as he continues to have sex with a monster, and it's just that his desires are sufficiently satisfied.

Furthermore, the coins that swirl about them like an adornment even after revealing their true form are actually materialized via their own mana, and it is plainly obvious that they are counterfeit if compared to currency in actual circulation; however, they aren't merely illusions or what not with no actual substance. Known as "mamono realm gold" they are made of metal with actual physical substance that has the power to fan the flames of desire in humans who behold the glimmer. Due to that property, these coins are treasured by many monsters and fetch high prices on the market.

Those simply looking to make a living, those seeking to live the life of luxury, and their ilk mostly have their desires sated by obtaining a creeping coin and copulating with her day and night, but on the other hand, others may need the money to pay for expensive medicine to treat a disease, or for some other purpose, and in such cases, the mamono realm gold they are able to produce by receiving large amounts of essence usually makes enough money when sold. Fake treasures, they may be, but you don't necessarily come up bust when you get one. 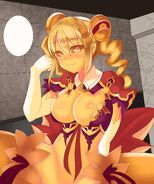 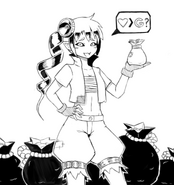 by Nav
Add a photo to this gallery

Bronze recolor by Beberep
Add a photo to this gallery

Retrieved from "https://monstergirlencyclopedia.fandom.com/wiki/Creeping_Coin?oldid=1206848"
Community content is available under CC-BY-SA unless otherwise noted.