Omnivorous, mostly fruits and animals in the mountains

Monsters that quietly live deep in mountains, etc. and have an odd appearance with blue skin and a single eye. As they are called ex-giant family and ex-giant type, they were originally giants to begin with, but due to the influence of the current Demon Lord, they've changed to about the same size as a human so that it would be convenient to have sex with human men.

It is said that they were originally members of the divinities, but due to some gods that were disgusted by their single eye, they were banished from the divinities and they changed into monsters. For that reason, they have an extremely great strength and the Demon Lord's power was only partially effective. Their single eye trait has remained prominent.

Since most individuals have comparatively docile personalities, hardly talk and barely show changes in emotion, it's basically very hard to tell what they're thinking about. They normally live deep in the mountains and work as blacksmiths. Occasionally they distribute the weapons they produce to the marketplace through monsters and others that intermingle with humans. Their talent is considerable, so many warriors and heroes visit their dwelling to have weapons made after hearing rumors.

They don't try to get involved with humans unless it's for work, which is rare for a monster and even if they see a human man, they almost never attack. According to one explanation, it may be that "they feel inferior for having a single eye" because of their personal history.

However, even they have a need to produce offspring, so sometimes they appear near human settlements and ask human men on the road, "in exchange for a sword I made, I want you to spend a single night with me for the purpose of procreation." After that, by the time the man wakes up, they'll already be gone and only the weapon promised will be left behind.

As mentioned before, these are extremely excellent weapons and most of those who obtain their weapons become noted for their great valour.

Just as they are skilled at handling weapons, they are also skilled at handling a penis, which can be said to be a man's weapon, Since those who obtain their weapons are charmed by the pleasure given by their superior techniques, as well as their devoted and wholesome attitudes, they often disappear somewhere after making a name for themselves.

The men who disappeared are probably now living happily with them, deep in the mountain.

Their emotions are normally hard to discern, but not during sex. They lower their eye and their cheeks redden with pleasure, and they'll smile in happiness at being able to have sex with a man.
Add a photo to this gallery 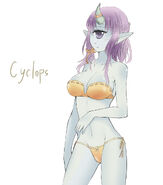 Chibi of Griefs, a friend of mine on Miitomo whose avatar is a cute Cyclops girl (by MihaiTheForsaken)

Retrieved from "https://monstergirlencyclopedia.fandom.com/wiki/Cyclops?oldid=1172649"
Community content is available under CC-BY-SA unless otherwise noted.