An angel who has completely transformed into a succubus. Their pure white wings have been warped by the power of the succubi, turning black in the process. They are completely depraved and aside from appearances, have nothing in common with angels whatsoever.

Indulgence in sex with men and mutual pleasure is what solely guides their actions. They love human desire and they become overjoyed when it is directed towards them. Acutely sensitive to such desire, they become unbearably aroused after sensing it and they will attack to receive a man's desire more deeply inside their body. Whenever they find a human or angel with a negative opinion about sex, they seduce them with well constructed arguments and finally give them pleasure. They want others to fall as they have fallen. They're monsters, but they are not under the command of the Demon Lord. They are said to be servants of the one known as "The Fallen God."

Regardless of having been able to taste the pleasure that they had desired, men who continue to have sex with them will remain completely unsatisfied, instead desire will only swell no matter how much they have sex and their passion for the dark angel will burn with even deeper intensity. Eventually, their head will become full of desire and they'll be unable to think of anything but crashing into the dark angel with desire and ravishing her. Of course, that is their ultimate wish. They want to thoroughly corrupt men so that they'll come at them and ravish them with endless desire. that is what pleases them most. Beyond that point, a man will continue to fall with them forever and then, their heads too will become full of thoughts of him:

"I want to make sweet love with him while locked in a mutual embrace like lovers. I want to service him plenty. I want to put a wonderful expression of ecstasy on his face. I want him to make me his and ravish me like an animal. I want to get on top and unilaterally ravish him so i can see the pathetic look on his face. I want to take his penis in my mouth, suck it and lick it. I want my whole body to be covered in semen and stained pure white, including deep inside my throat, the inside of my vagina, my face, my breasts and my black wings."

Every conceivable desire towards a man swirls inside them and they only act according to these desires.

It is said that they dwell in a place called “Pandemonium.” Once she has completely corrupted a man she has captured, a dark angel will carry him off to this place. It is said to be a location where space-time is distorted due to the power of the “The Fallen God,” a dimension where there's no aging or starvation and the same moment continues for eternity. After returning to this place with a man, a dark angel will have sex with the man for eternity in the absence of time, leading a lifestyle that is solely consumed by the desire to continually indulge in pleasure.

Utterly corrupted, they smile with rapture when their whole body is sullied by semen, the symbol of male desire. As far as they're concerned, the sole purpose of their body's existence is to be defiled by men.
Add a photo to this gallery 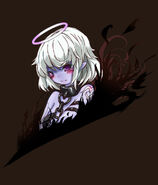 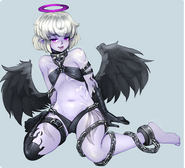 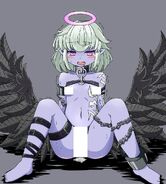 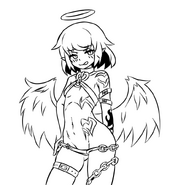 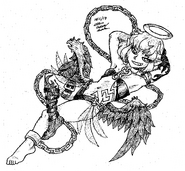 by HorrorPunkOtaku
Add a photo to this gallery

Retrieved from "https://monstergirlencyclopedia.fandom.com/wiki/Dark_Angel?oldid=1162810"
Community content is available under CC-BY-SA unless otherwise noted.