Dark elves are bondage-happy monster girls that capture human males for use as sex-slaves. Which is what most monsters in the Monster Girl Encyclopedia world do, really, but the dark elves are much more blatant about it than most. What with the whips, the S&M, and having their captives do all of the cooking. Incest isn't usually taboo in monster circles, but dark elves take things one step further than other monsters here too and make it mandatory. Their daughters are trained in sex, using their own father as practice.

Ironically for a race which is now perverted even by monster girl standards, the dark elves weren't naturally monsters. In the age of the former Demon Lord, they were one of the non-monster intelligent races, along with humans, dwarves, fairies, and regular elves. However, even back then they were debauched revelers, and once the succubus Demon Lord took over, they gleefully gave themselves over to monsterization. As such, they are now an all-female race of dominatrices.

A race of elves possessing brown skin and pointed ears. They dwell in peculiar villages that they establish in forests and Demon Realms, etc. Long, long ago, before the current Demon Lord's reign, they were not monsters, but upon her assumption of power, the dark elves, who were lustful and uninhibited to begin with, offered their own bodies to the Succubi and changed into monsters.

They don't detest humans as other elves do, but they love to make human men who strike their fancy submit to them using pleasure. Men they capture will receive plenty of love, as either "sex slaves" or "pets." Besides making enslaved human men prepare their meals, etc. they also reproduce using these slaves. As one can tell from that, their slaves are essentially the same as what other monsters refer to as their husbands. It's just that their way of showing love for their men is different from that of other monsters.

Dark elven children are thoroughly taught skills for pleasuring a man and the taste of pleasure using their own fathers. Eventually, when they reach adulthood, they'll go off on a journey in search of their own slave, but it is said that there are also those who will fall in love with their father through the training and will no longer desire any other man.

Father/daughter incest is taboo among humans, but they are vastly different from humans, as far as they're concerned, if a daughter wants to have sex with her father, then it's only natural to put desire first. They have no revulsion towards incest whatsoever. If a daughter desires her father, then she'll start having threesomes with her mother and father from that night on, as if it's the most natural thing.

They get along extremely poorly with the stubborn elves and supposedly they frequently fight, or so it is said, but it's mainly the elves that unilaterally despise the dark elves, they're the ones who try to wipe out the dark elves. On the other hand, a dark elf would have fun thoroughly teaching an ignorant captured elf pleasure, changing her into a lewd monster just like herself.

In this way, whether kicking or whipping, pleasure is given instead of pain. The skills with which they torment their slaves are truly the result of education and training from early childhood.
Add a photo to this gallery

Me being courted by a Dark Elf (by TheToxicGemstone) 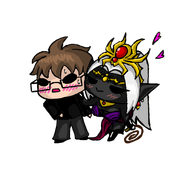 Chibi Mihai being courted by a chibi drow (which are dark elves, so it works). (by Mihai) 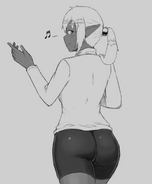 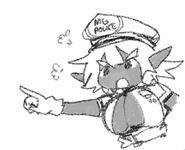 by Latenight
Add a photo to this gallery

Retrieved from "https://monstergirlencyclopedia.fandom.com/wiki/Dark_Elf?oldid=1166145"
Community content is available under CC-BY-SA unless otherwise noted.