Also called "The Sun of Darkness," a dark matter is a being that embodies the combined desires of monsters and incubi, along with the monsters' highly condensed demonic energy. Even though a Demon Realm is overflowing with the magical energies of monsters, dark matters only inhabit places with extremely high concentrations. The race is extremely rare and there are very few individuals in existence.

The part that has the form of a woman, embodies the desire of women, especially monsters and the demonic energy of monsters, the black orb the woman is straddling embodies the desire of the incubi, men, etc, joined with the demonic energy. Their thoughts are governed by the female part. As demonic energy and desire incarnate, their heads are full of thoughts of having sex with men and they fly around the skies of Demon Realms astride the black orb, in pursuit of human men in order to sate that desire.

When they find a human man, they envelop him with the black orb, making it flow into the man. After having his entire body violated by super- high concentrations of demonic energy, the man is instantly transformed into a powerful incubus. By merging with the black orb, the man's desire and the desires of the black orb are combined, he will then be ruled by extreme lust. Once this happens, the man will end up giving in to desire, having sex with the remaining part of the dark matter, as a substitute for the black orb. After obtaining spirit energy in this way, they produce a high volume of magical power and scatter it all around. This power then activates the desires of all the monsters around, making them have frenetic intercourse with men. Thus they truly are a "Sun of Darkness" which illuminates the Demon Realm.

Also, though it is rare, they do occasionally attack human women. In this case, the woman who was attacked will end up merging with the female part, rather than the black orb. With the black orb's tentacles crawling all over her, pleasuring every inch of her body, a woman's mind will be immersed in pleasure and she will meld with the female portion of the dark matter, whose head is full of pleasure in the same way. They will fuse and before she knows it, she'll have become the dark matter. This dark matter's consciousness and memories will be that of the original human woman combined with the dark matter's powerful desire. In the case that the woman had an interest in a particular man, that sentiment will cause the dark matter's desire to take on a distinct shape, their desire will grow deeper and more powerful. Even thought they normally make no attempt to leave a Demon Realm, in such cases, there is an exception and they'll head straight for the man they can't stop yearning for in order to have sex with him, by sensing his location via his spirit energy, while being violated by the black orb, thus causing their desire for the man to continually swell.

They usually only come into being in Demon realms, but it is said that they also naturally form outside them in lands that are in the process of being converted into demon realms due to a high concentration of demonic energy in one place. Thus if they are seen to appear in places outside demon realms, it's a sign that the land is about to be converted into a "Demon Realm". As soon as they appear and get their hands on a man, at the same time huge amounts of magical energy will be scattered about, converting the land completely into a demon realm.

They are a kind of elemental. There are varying opinions, but they're regarded as being a pure elemental of the dark element, so they're classified as "dark elementals." There are those who have doubts as to why they aren't regarded as demi-elementals since they were monsters to begin with, but since they form covenants through having sex, pour in the power of "darkness", have a powerful influence on the environment around them, enriching the element of "darkness", they have a lot of traits in common with being dark elementals.

A dark matter who has fused with a woman loses the ability to do so again. If she were to go after another human woman that woman would become a succubus instead.[1]

Saphirette Spherica, a dark matter, and the writer of the Mamono Realm Traveller's Guide

A figure of a woman changing into a dark matter via fusion. Their bodies and hearts are melding into one due to the continual pleasure.
Add a photo to this gallery 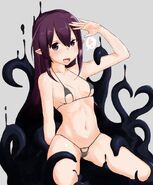 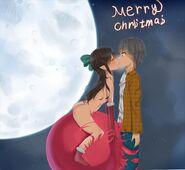 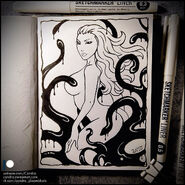 Retrieved from "https://monstergirlencyclopedia.fandom.com/wiki/Dark_Matter?oldid=1182435"
Community content is available under CC-BY-SA unless otherwise noted.