A type of succubi that are zealous adherents of “The Fallen God”. They are human women that were corrupted into monsters after being attacked by “Dark Priests” or “Dark Angels”. They drape themselves in the garments of the holy servants of god, but on the inside they’re actually an extremely lustful succubi. According to the teachings of the Fallen God, they attack humans in pursuit of pleasure.

It is their duty to spread the teachings of the Fallen God and corrupt humans. They change into human form and slip into human settlements to perform activities to promote their faith. They aggressively attack particularly abstemious humans, seeking to indoctrinate their flesh with pleasure and the tenets of their faith.

Their greatest joy is to incite desire in men and receive that desire with their own body, and they have a lewd body for arousing the passion of men. Even a single word from them is alluring, and even their slightest gestures somehow come off as provocative. They incite carnal desire and raise it to swell.

When they find a human man that they're fond of, they give him pleasure through devoted service as is appropriate for a cleric. Their bodies exist only for the sake of receiving a man’s desires, and they offer it to men, seeking sex. Through sex they draw out more of a man’s desire, and after repeated intercourse they raise a man’s desire to be even stronger and more obscene causing him to fall with them.

Also, human women attacked and corrupted by them are changed into dark priests the same as them. A new Dark Priest has already had the core of her body completely stained in the teachings of “The Fallen God”, and she will act according to those teachings, seeking out pleasure and men as her desire sees fit.

As written above, their duty is to perform missionary activities, but since they’re also fallen themselves, once they find a man who strikes their fancy they prioritize their own desire and abandon their duty to run off with the man and seclude themselves in “Pandemonium”. Once secluded in Pandemonium, they will keep having sex with the man as they are driven by endless desire, falling even deeper into the depths of pleasure.

In addition to the Dark Priestesses as a race, there are also nuns from other races of the Mamono: for example, Lamia can be sisters or priests in the Church of the Fallen God. But the Dark Priestesses are the best race to receive the blessings of the Fallen God. However, other races can also receive the blessing of this goddess and benefit from her, simply she will not be so strong.

Prayers dedicated to the Fallen God are performed by having sex with men. They show the Fallen God how obscenely they've fallen, and how big a desire of men they've received.

Sisters Falling cover
Add a photo to this gallery 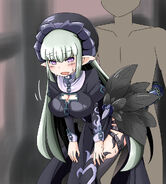 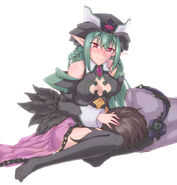 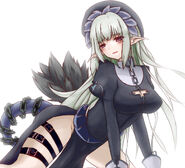 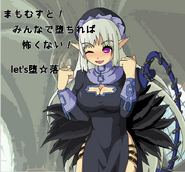 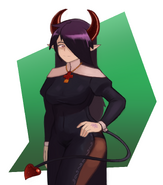 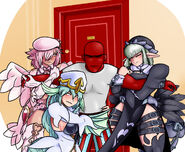 by IConsents
Add a photo to this gallery