Extremist monsters share with the Lilim Druella a dedication to spreading the Demon Realm across the whole world. Depending on the individual and the circumstance, they use many means for this, and some lewdly monsterise every human woman they see [1].

Higher-rank Demons that have blue skin and black sclera, whose bodies contain vastly powerful wicked magic. In the age of the former demon lords, they were not driven against humans by appetite or instinctive murderous impulses. Instead, they were created distinctly with malevolent intentions. They now believe the diminutive and foolish humans ought to be ruled by monsters, and they are the foremost race of the "radical faction" which plans to convert the entire world into a demon realm. The demons feared in the former era were not "Succubi", but these "Demons". Although they have sworn loyalty to the current Mamono lord, their ideology is even far more radical than hers.

They love seeing humans become unable to resist pleasure and succumb to evil, and they will use whatever means possible to lure humans onto the path of corruption - at times using their cunning, and at times using their demonic powers. Their appearance exudes decadence and depravity, and men fascinated by this are led to corruption. If they whisper alluring words into a man's ears, whether he likes it or not, it will induce a vision of the days of pleasure that could be. In spite of their wicked and oppressive appearance, once a man copulates with a demon, the sweet pleasure that exists solely to corrupt humans will guide him further along the path.

Once a man has walked along the path to corruption, a demon will propose a "pact" that mainly says "for offering everything to me, I promise you eternal pleasure." Most men would gleefully offer everything if it would make the days of pleasure envisioned become a reality and make that pleasure last for eternity. The pact is bound with sorcery and can never be broken. From the moment the pact is sealed, eternal pleasure is guaranteed; and along with that, the man is bound in eternal submission to the demon. A man will even come to experience arousal and take delight in submitting to her.

His body will be under her control and his penis will tower and prepare to offer spirit energy just from her demanding it.They treat their men entirely as their personal property including every single hair and every drop of semen; and they keep them at their side so they can siphon energy whenever they please and provide eternal pleasure, as agreed in the pact.

At a glance, it looks as if the Demon has total domination over her man, but in actuality, the situation is a bit different. The Demon herself is also bound by the power of the pact, and can never go against it. In other words, it means the man can also use the demon's body for the enjoyment of pleasure whenever he wants and in any way he pleases. If a man demands sex, she must accept everything.

Regardless of it not being part of the pact, a Demon will cook whatever her man wants to eat every day, and visit clothing stores to acquire whatever outfits he wants her to wear. It seems that it is in their nature to give into their men's demands and spoil them, regardless of the pact. Deep love and over-protectiveness is the reason they always want to keep their men near them. Basically, the pact boils down to a "marriage compact", and the reasoning behind their radical beliefs may be that they are worried about humans because they are so weak and they want to place them under their protection.

They believe that all women should become monsters, and they actively attack human women as well and change them into monsters. On such occasions, unless the woman comes to have the same radical ideology as them, she would not become a demon; so most will become succubi instead. For that reason, when trying to recruit a woman as an ally, they take special care during the process of monsterization to thoroughly train and educate the woman, and by doing so, awaken and fuel the hidden wicked desire to dominate a man within her, thus raising a Demon.

This time's update “demon” is, as you can tell from the blue skin and black and white reversed eyes, a demon at the forefront of the “radical faction”. If devil is the radical version of imp, then they are sort of the radical version of succubus. Speaking of demons, as of the present, they're succubi, but in the age of the former mamono lords, the demons were these demons, or something like that.[2]

TL Note:Clearly the "evil" in the profile refers to how their sexual practices go against the Order, not to conventional evil. The rest of the profile makes it clear they are not conventional "evil" demons, given they act out of wanting to protect humans.[2] 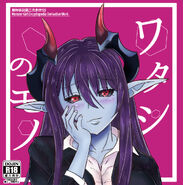 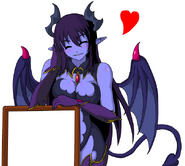 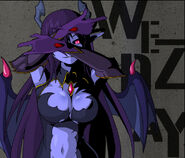 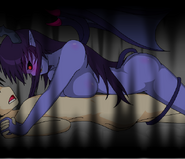 Dorothy - a Demon specie I made for Oz. Her description is here: http://monstergirlencyclopedia.wikia.com/wiki/Thread:507191 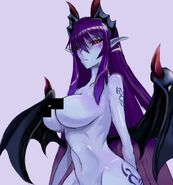 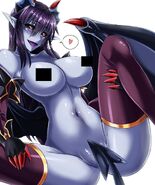 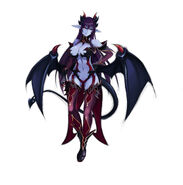 By [mantarou (shiawase no aoi tori)]

Boy, don't worry about anything... Make the contract with me. By [butter-t]

Demon and the DOOM Marine 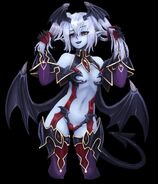 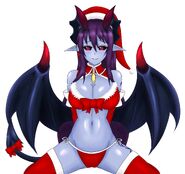 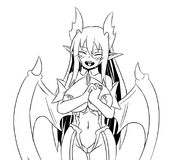 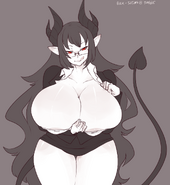 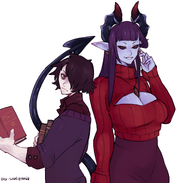 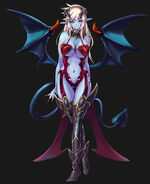 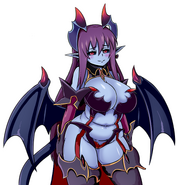 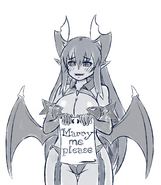 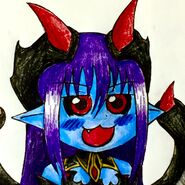 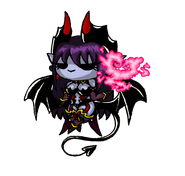 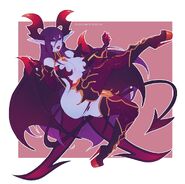 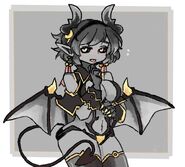 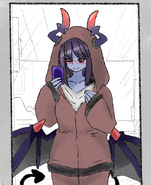 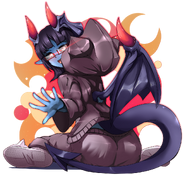 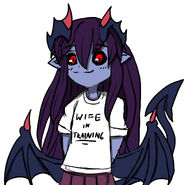 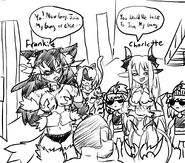 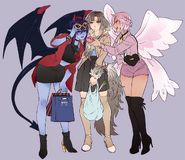 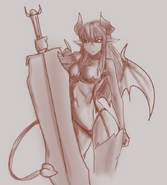 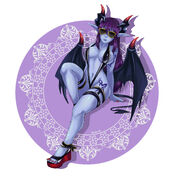 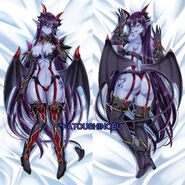 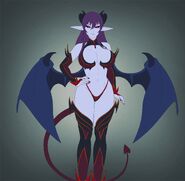 Grayfia Lucifuge from Highschool DxD as a demon by HARYU

by by Lyn Kai カイリン

Retrieved from "https://monstergirlencyclopedia.fandom.com/wiki/Demon?oldid=1208169"
Community content is available under CC-BY-SA unless otherwise noted.