An insect monster known as "devil bug" that has existed since ancient times. They prefer dark, damp places, and aside from dwelling in caves and the like, they also often sneak into places such as warehouses and human dwellings unnoticed, living under the floor, in the attic etc. Their bodies are supposed to be right around the same size as a human girl, yet it's said that they're able to invade even small homes and settle down without the residents being aware of it.

While they are intelligent enough to use language, they're almost completely irrational, and their behavior is directed by instincts such as hunger and lust. What they concern themselves with is eating or having sex with a human man. They can actually sense the odor of human men and spirit energy and their body is always burning hotly with the urge to mate. They crawl around excitedly seeking human men.

As soon as they spot a human man, their eyes become fixated on only him. Their hotly flushing body will be more than ready enough, so they'll swiftly leap at a man, attack, and attempt to copulate with him as soon as possible.

They always live in a group, and it is said that if there's one, there must be thirty in the same place. For that reason, once an individual that has captured a man begins having sex with him, they'll soon sniff out the thick odor, and then a great many devil bugs will appear, and the man will end up being surrounded and violated by all the extremely aroused bugs.

Once that happens they won't let him go until he passes out. They'll continue to use his body to console themselves meanwhile, and when he later wakes up, the devil bugs will be overjoyed, and they'll attack and copulate with him once more.

Even if there's no man in the house, just sniffing the barely lingering scent of a man is enough to put them in a state of lustful frenzy. In the case that they are unable to have sex with a man, they'll either masturbate while going around looking for a man, or go at it among themselves until they become covered in one another's love juices. Even among all the monsters, they have especially little concern for the father-daughter relationship. Once a child has grown to a certain degree, she'll no longer be able to see her father as anything other than a man. When her body gets hot for her father, she'll obey it, and attack without any regard for the fact that it's her own father.

Aside from the scent of spirit energy, they're also attracted to the lingering odor of sweat, filth, and more, so the filthier the home environment is, the easier it is for them to settle there. If you don't want to be attacked by them, I recommend keeping your body and room clean. 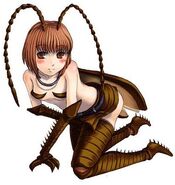 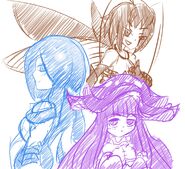 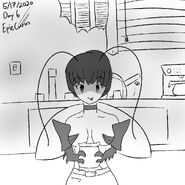 Retrieved from "https://monstergirlencyclopedia.fandom.com/wiki/Devil_Bug?oldid=1182574"
Community content is available under CC-BY-SA unless otherwise noted.