A monster that is thought to be born from a fusion of the lingering regret of those who lost love and demonic energy. They reveal themselves after being drawn by the lingering regret of men who were rejected by the women they loved. They don’t have a fixed form. Instead, they read the minds of human men and appear in the form of a woman that the man had a one-sided crush on. Not only do they look like her, they also take on the woman’s memories, personality and abilities, making them their own.

However, their form is modified to be based on the memories and ideals of the man who was targeted. For example, even if the woman a man had feelings for was “nice on the surface, but malicious and scheming on the inside,” she becomes a woman matching the man’s ideal that is “pure and gentle, even in heart.” Also, since the doppelganger herself has feelings for the man, the reason they transform is “to become the man’s ideal woman so he can’t help but love her.” Most men aren’t able to resist the temptation of a doppelganger and they’ll have sex and release spirit energy on the spot when seduced. Even afterwards, they continue to be the man’s ideal lover and continue to offer love and pleasure to the man.

They are always transformed and they never show their true forms, except when they lose the magical power to transform on the night when the moon can’t be seen. Their true form doesn’t look anything like the guise of the ideal lover which they had assumed, but is that of a plain little girl draped in black. Since they know that the person the man loves is the woman whose form they borrowed and not them personally, they fear being revealed for who they truly are and being hated by the man. For that reason, when night comes, they hide themselves somewhere so that they won’t be found by the man. But since they’re so in love with the man that they can’t help it, they always hide nearby in a place they can definitely watch him. If one were to search thoroughly, they could probably find her.

It is said that when a man truly falls in love with a doppelganger herself and not the “ideal girlfriend” whose form she borrowed, they completely lose the ability to transform since they can’t transform into themselves.

Also, if it turns out that the man was mistaken in thinking that his love had been one-sided and it turns out that the real woman was actually fond of him, then when the woman catches sight of the doppelganger borrowing her form, from that moment onward, the woman who has the same form and the same feelings for the man, becomes joined to the doppelganger’s demonic energy.

Once joined through demonic energy, their thoughts, feelings and memories start linking and because of the doppelganger having sex with the man, the memories and pleasure of having sex flow directly into the woman's head. The more the doppelganger loves the man and seeks sex, the more the woman's love and passion for the man will rapidly swell. Since what the doppelganger transforms into is based not purely on the woman, but on the man's ideal of her, the woman linked will naturally change to become closer and closer to that ideal image. Eventually the woman becomes a monster exactly like the doppelganger and she'll head off to be with the man she loves and have him pour plenty of spirit energy inside in the same way as her other self.

Together with another monster that is an exact clone of herself, they go wild while having sex with their man. They freely offer twice the love and twice the pleasure. 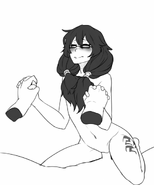 By [less]
Add a photo to this gallery

Retrieved from "https://monstergirlencyclopedia.fandom.com/wiki/Doppelganger?oldid=1162899"
Community content is available under CC-BY-SA unless otherwise noted.