Fourth Princess of the Demon Realm

Druella, styled Fourth Princess of the Demon Realm and Mistress of Lescatie, is one of the eight characters with personal profiles in Monster Girl Encyclopedia World Guide I: Fallen Maidens and a dedicated short story in Monster Girl Encyclopedia Stories: Fallen Brides. A lilim of the monsters' 'extremist faction', she is committed to "aggressively expanding the demon realm", and in this vein she was the primary architect of the conquest of the Theocracy of Lescatie. Druella personally monsterized several of its most powerful heroines during the conquest, including Wilmarina Noscrim, Francisca Lescatie, and Mersé Dascaros.

The fourth-eldest of the lilim, Druella is the adoring daughter of the Demon Lord and her husband as well as the younger sister of the Queen of Hearts. After capturing Lescatie, Druella is "presently laying low", ruling the nation by proxy through the roper queen Francisca. As demon Lescatie's de facto sovereign, she was interviewed by the Wandering Scholar when he visited to write Fallen Maidens, and put monsterization spells on copies of the book.

Druella's relationship status is unknown. whether she was married before the invasion of Lescatie, whether she participates in the harem with her heroines and 「YOU」‎, or whether she remains single to this day.

A powerful succubus who has white wings and a white tail, and one of the “lilim” who are daughters of the demon lord. She’s the fourth born. Just like the other lilim, she has a hedonistic, lustful personality. As one who embodies what it is to be a succubus, she appears sinister, and beautifully lewd. Those who behold the sight of her are stricken with lust and fear simultaneously, and when they fall to their knees due to her vast demonic energy, it looks almost like they’re kneeling before her to swear fealty. She fundamentally only has interest in things that are either fun, or feel good. She tries to paint over everything else with pleasure.

Rare among the monsters, which tend to not get personally involved after obtaining a husband, whenever she sees human women she changes them into monsters without exception. She’s a radical monster extremist who plots to change all lands into demon realms overflowing with the lovely cries of monsters. She brings several ferocious subordinates along with her who have the same kind of thinking. Whenever she visits human lands, all women end up changed into monsters, and all men changed into incubi, and they always change into demon realms.

All lilim fundamentally enjoy the sight of monsters and incubi living happily together only making love, yet even for a lilim she prefers especially licentious, wild intercourse. Not only does she change women into succubi, she continues to infuse them with her demonic energy afterwards, until the only thing left in their heads is the drive for pleasure and want intercourse. Until they blossom into beings fit to be succubi, she trains them rigorously.  This explains why “Wilmarina” shows up in this book evolved beyond a lesser succubus into a succubus, and why “Francisca” is more powerful than an ordinary roper.

Hierarchical relationships are loose, and most of the monsters are individualists, so it is rare, yet her subordinates and many of the women she has changed into monsters adore her, and are fiercely loyal to the point that it’s abnormal. For many monsters she and her orders are the most important things to them, aside from their husbands.

She has the power to change monsters infused with her vast demonic energy into even more lascivious and powerful monsters. Her subordinates are infused with her energy as a reward depending on their feats. If they’re able to obtain an even lewder body due to this demonic energy, then the pleasure they experience when they have sex with their husbands swells up, they become able to give more pleasure to their husbands, and are able to obtain more spirit energy as a result.

For that reason, this demonic energy is a more pleasing reward to them than anything else.  Her subordinates eyes are always glowing with an alluring red light, and their bodies and clothes are adorned to with matching red eye jewels, so it’s easy to tell they’re her followers. The red light is released by her demonic energy, and the more of her energy is contained in their bodies, the more alluringly it glows.

It is supposed that aside from the persistent training they receive when being turned into monsters, and the rewards they receive afterwards, the other reason why they adore her so much is that they have so much of her demonic energy in their bodies. It skews their thoughts and ideals to resemble hers.

She herself adores her mother, the demon lord, and her father, the demon lord’s husband. And is aggressively expanding the demon realm in order to realize the ideals of the demon lord as quickly as possible. As an extremely dangerous being, a high rank monster with a lifespan that can even be said to be infinite, the span of her invasions is extremely long and she’s presently laying low in Lescatie. However, once she starts moving again, she’ll probably aim for a main city of The Order once again. Since it would end up being converted into a demon realm, we must be vigilant from now on. 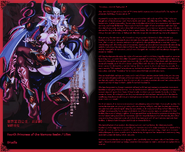 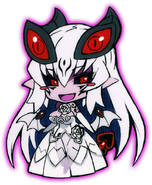 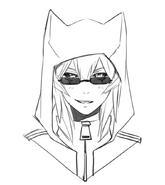 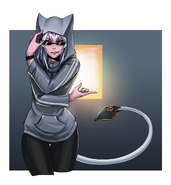 Druella in disguise by .less 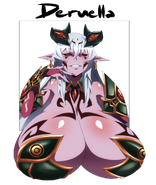 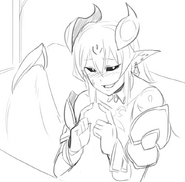 When Druella really questions your life decisions... Art by .Less 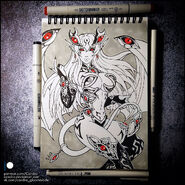 Retrieved from "https://monstergirlencyclopedia.fandom.com/wiki/Druella?oldid=1148560"
Community content is available under CC-BY-SA unless otherwise noted.