Dwarves are a hardy, friendly race of expert miners and craftsmen that live underground. They are one of the non-monster species that share the Monster Girl Encyclopedia world with humans, elves, fairies, etc. But when exposed to demonic energy, female dwarves can be twisted into nymphomaniacal, monster girl versions of their original species.

In stark contrast to elves (with whom the dwarves share an ancient and amply-reciprocated racial antipathy), even in the age of the former Demon Lord, dwarves were friendly with humans and interacted regularly, as traders or mercenaries. In stark contrast to the Order, in the present age dwarves don't seem to have any particular problem with monsters either; indeed, the dwarven men were positively pleased when succubi started turning their women into insatiable sex-fiends, and monsterization spread through the dwarven nations "like a wild fire". What probably seemed like a good idea at the time is in the present day coming back to bite the dwarven race in the ass, because the monster girls' only-daughters rule means that male dwarves are now "on the precipice of extinction" - an object lesson for elves and humans.

Ages of friendly relations plus monsterization, rendered them well-disposed to human males already, and now the lack of any of their own kind to sex up is leading more and more dwarven women to come out from underground and take up residence in human villages, hoping to rape themselves a husband. Being even smaller than the usual loli means corrupted dwarves are well-represented in the Sabbath. During sex, their speciality is handjobs, using their dextrous, craftsman fingers to milk spirit energy out of their victims.

A monster with an appearance almost like that of a preschooler, that lives in villages made in caves and mines, etc. There are numerous monsters that have forms like small children, but even out of all such monsters, the distinguishing characteristic of the dwarves is that they stand out as having a particularly very young appearance, but this form is that of an already adult dwarf. In contrast with their cute looks, they have a considerate, exuberant personality and they're mostly mature, caring women. Their mentality also matches their physical age and they will seduce men and seek sex as adult women.

Originally, they were not monsters and only those who were corrupted by succubus energy and became succubi were treated as monsters, but because of their personality, they accepted the individuals who became monsters as though nothing had happened, so they didn't banish them from their villages. At the time, dwarven men considered it to be a non-issue regardless of whether or not their women were monsters and it is said that they rather preferred monsters for being lustful and giving them pleasure, so they even welcomed if their own wives became monsters. Because of that, the dwarven women changed into monsters, one after another and as a result, unlike others such as the "Elves" who banished the individuals who became monsters to prevent the monsterisation of their entire race, dwarves have now just become regarded as a race of monsters.

As a result, at present the dwarves are just regarded as a type of monster. They are very dexterous, so most of them either work as miners, mining metal and gems, or as crafters making weapons and accessories utilising such materials. The beautiful works they produce fetch extremely high prices at market among humans and monsters.

The cheerful and light-hearted dwarves maintained active relations with other races before they became monsters, mainly with humans. They were known to frequently visit human settlements in order to sell their gems and products, but since they've become monsters, they approach humans even more amicably. Many unmarried dwarven women also move and take up residence in human settlements, seeking human men.

They are both industrious and lustful. Once a man strikes their fancy, they aggressively tempt him and are likely to sometimes attempt sexual assault. As previously noted, they have nimble fingertips. That finesse is a powerful weapon for giving men pleasure. The sort of pleasure that can be had from their tiny little hands is said to be even greater than that which one could experience from the original race of "Succubi." Just being fondled by their hands is enough to make a man their prisoner.

Just like when they're crafting their works, their hands envelop the penis with both intensity and delicateness. The pleasure is so exquisite that an erection will start to tower more enormously than usual, as if it is being crafted by their hands. Plus, in spite of their looks, they posses extremely durable bodies; so, they prefer wild, frenetic sex. They indulge in pleasure, riding their man so wildly that it makes him worry about whether her tiny body might break.

Also, due to conflicting personalities, they don't get along with elves and there is a history of bad blood between them. Even now that the dwarves and some of the elves have both become monsters, they still don't get along at all, having arguments over the right way to treat a man and fighting over the same guys, so it seems nothing has changed.

Their bodies are durable, and they can make their tummy swell and completely swallow up even the sort of erections that look like they wouldn't fit in their vagina. They shake their hips as if skewering their own insides.
Add a photo to this gallery 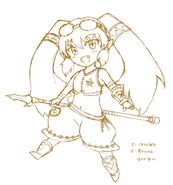 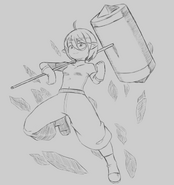 A race where even adults stay short like children. The men are short and stout, with rugged, muscular bodies. They also have grand beards that reach all the way down to their stomachs. The women have a form like that of a slender little girl, and no matter how much they age, their appearance never changes. Dwarves are lively and cheerful. They have compassionate and large-hearted personalities. As long as they're not hostile, they approach everyone in a friendly manner. So they don't think highly of the elves who directly express their hostility and scorn. They've had many wars with the elves since ancient times.

They have nimble fingers, so they make their villages in caves and mines. Many of them live as coal miners, or crafters, others use their durable bodies becoming mercenaries. There are also many who work as traveling merchants, selling works of dwarven craftsmanship. For these reasons, since ages long past, dwarves have intermingled with humans extremely frequently.

After a day of hard work, male dwarves like to booze it up and enjoy a woman's company, so when female dwarves began turning into succubi, most of them were pleased about their brides becoming the kind of lustful woman they preferred. They all began seeking dwarven brides who had been converted into succubi. Those who had wives that still hadn't become succubi wanted to change their wives into succubi. For that reason, succubus conversion spread throughout the dwarves like a wild fire, and since monsters don't give birth to males, soon male dwarves had all but completely vanished. As of the present, male dwarves, and pure dwarves are a race that is on the precipice of extinction.

As of the present, almost all of the dwarves have been completely converted into monsters. Dwarves are probably only known as a kind of monster. Unlike elves, the dwarves were once friendly with humans, and now that they've become monsters, they're way more friendly towards human males than they ever were even before.

Their childish bodies are still the same as before. They've ended up using their lively, cheerful personalities to seduce human men. They have vigorous sex with human men using their small bodies. Judging from appearances, they look just like children, but they're mature adult women. As far as they're concerned, they have an adult woman's body whose purpose is to arouse the desire of men. For that reason, should a man make fun of their figure, it will spark fury like a raging conflagration, and they'll make him understand the pleasure and goodness of their body by directly putting it into use.

Recently monsters with figures resembling theirs have gathered into a religious organization called “sabbath (p.184) “ that views it as a good thing and is trying to polish their bodies to be even more sensuously appealing. Many dwarves have begun appearing in the group. There they can study methods for using their childish bodies to give even more pleasure to men. Dwarves with their nimble fingertips have been continuing to acquire these techniques as their own, one after another. Thus, even though dwarves still have the same form, they are continuing to grow into ever more powerful succubi.

Antagonism Between the Dwarves and the Elves (MGE1)

The dwarves and elves have been fighting since ancient times, even before the age of the previous demon lord. Even at the present, the fighting still hasn't stopped. The elves despise the dwarves as an inferior race of fools with low intelligence. This angers the dwarves, and they keep responding to hostility with hostility. Now that both races have been reduced to lustful, lascivious monsters, for some reason, both elves and dwarves often tend to take a liking to the same men, and it often leads to a struggle. But now that they're monsters, it doesn't develop into the kind of fight where they spill each other's blood. Instead, they both snuggle up against the same human man. They rub their bodies against the man as though to assert ownership, pinching him between them, and soon begin to call each other names like “Ero-Elf” or “Pedo-Dwarf”.

Pretty, durable, and easy to use!

It's the well-known “East Giyamante Dwarven Craftsmanship Firm” that's got glass work with all three requisites! This time we're borrowing this page, so let us introduce our products! The gorgeous glass bottle packed full of alraune nectar in the illustration on the previous page is something specially made by us dwarves, “refillable/deluxe alraune bottle/long lasting version”.

Even though we call them bottles, they're not just bottles. The image of an alraune? Of course, that's an example of dwarven art that we want to recommend, but that's not all! The magically reinforced, durable, and hard to break glass bottle has been tempered with alraune energy using a new method. Alraune nectar placed inside will last a long time without spoiling!

Besides nectar, we've got “refillable/deluxe undine bottles/long lasting version” that can store undine's natural spring water. Aside from those, we've got all kinds of other storage bottles prepared!

For those wives with deep love who think “I don't want to put a bottle with the design of another woman in the nest with my beloved husband, it's outrageous!” of course, we've prepared some with simple designs for you. Besides that, you can custom order one made in your own wife's image!

Keep a bottle by your bed for those nights when you suddenly get the urge for some stimulation! Please purchase “East Giyamante Dwarven Craftsmanship Firm's” new refillable storage bottles! 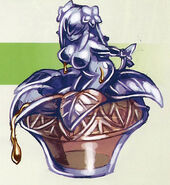 An alraune-shaped bottle for nectar]]

An undine-shaped bottle for spring water]]

Retrieved from "https://monstergirlencyclopedia.fandom.com/wiki/Dwarf?oldid=1186939"
Community content is available under CC-BY-SA unless otherwise noted.