Elves are a forest-dwelling race in the Monster Girl Encyclopedia world that are not naturally counted amongst the monsters. There are males and females just as with humans and dwarves; however, when exposed to demonic energy, female elves can be twisted into nymphomaniacal, monster versions of their original species.

Non-corrupted elves are a haughty, isolationist, and puritanical species that are more naturally magical than humans. They have an ancient rivalry with the dwarves that predates even the age of the former Demon Lord. Precisely because elves are so prideful and pure, succubi and dark elves particularly enjoy corrupting them. This kind of lesbian sexual predation by the inma is causing pure elves to disappear rapidly.

Although they naturally look down on pretty much all other races, non-corrupted elves are physically capable of interbreeding with humans, producing half-elves. When they become monsters, in the same style as angels the elves' high magical power prevents them from sprouting succubus horns and wings, although their bodies do become more sensitive, beautiful, and arousing, in the usual monster style. Elf villages are scrupulous about exiling those touched with demonic energy; once they're cast out, "even if it isn’t their intent, they’ll advance in the direction where there are human men". Why they specifically seek out human men, as opposed to their own species isn't clear,[1] but once they find them, monster elves prove particularly fond of filthy, hardcore sex.

Exactly how elves are related to dark elves in the MGE world is not clear; Wandering Scholar reports in Fallen Maidens that "These two races were entirely separate from the beginning", but the species' mutual antagonism implies there may be some history there. In any case, it's not like angels and dark angels: elves are not turned into dark elves or vice-versa, as the two are distinct species.

The most well-known type of elves, also known as the forest elves. They look just like a human, except with pointy ears and they innately posses high amounts of magical energy. They deem themselves as higher beings compared to humans, and thus most individuals look down on them and loath them. They live in particular villages established deep in the forest.

They weren’t originally monsters, and only those who received succubus energy and turned into succubi are treated as monsters. Elves normally live deep in the forest where people rarely thread, but those who have become succubi will be banished from their village due to the laws of the elves. Afterward, since they naturally seek human men due to the succubus instinct, they will often wander at the outskirts of the forest near human settlements.

Due to their innately high magical energy, in the early stages they won’t be completely violated by succubus’ energy. The horns, wings, and tail normally seen in succubi are nowhere to be found, and they retain their noble and proud elven mind. However, in contrast with their hearts, their body will have completely changed into that of a succubus, and it will always throb seeking human men, tempting their hearts. Due to their elven mind, they’ll find it disgusting, and will desperately try to resist the throbbing.

However, with their body being that of a succubus, even if it isn’t their intent, they’ll advance in the direction where there are human men, and once they spot a human man, it’ll start throbbing even more strongly in the pursuit of pleasure. Their words and mannerisms will contradict their will, naturally becoming more obscene to tempt the man.

Eventually, the rational mind of these elves will reach the limit, and they’ll either give into the instinct and attack a man, or controversially, be attacked by the man they tempted, and end up having sex. After taking in spirit energy this way, an elf’s mind will be melted by pleasure, and her body and heart will completely change into that of a succubus.

Ironically, the longer they endure it, the more powerful and lewd a Succubus-Elf they end up changing into. Those who have completely become succubi will actively seduce and have sex with men, as if the hatred of humanity they had harbored until then was just a lie. As if ashamed of having been so pure until then, they’ll receive the thick white of semen of the human men they used to despise as if to defile every part of themselves that used to be clean, and their expression will be one of ecstasy.

Did the Dark Elves <-> Elves hate before the first ones became mamono?

"This race is perfect for us," "Because we are from the same tribe ..." I think that there was a certain hostility among them, but they could cooperate, since they were elves together. They do not hate each other after they become mamono.

Elves who have completely become succubi in body and heart will bathe in the semen of humans they formerly regarded as filthy, and experience joy as they themselves fall to the level of a filthy creature, the same as their beloved human men.
Add a photo to this gallery 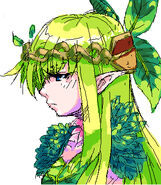 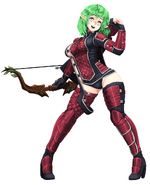 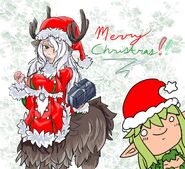 Even at the present, there are elves who live in a most peculiar fashion, building villages deep in the forests. They have beautiful, delicate forms with long ears, and, compared to humans, they have greater magical power from birth. They live in harmony with nature. They are the guardians of the forest who have continued to protect nature from the humans for generations. They live by hunting wild animals, and eating fruits and vegetables that they gather from the forest. They never forget to express gratitude for this food. It is said that they always recite prayers to thank the forest and the animals before they eat. They generally have personalities that are proud and pure, but they have hard heads and are extremely inflexible.

Since the age of the former demon lord, they've always looked down on humans, monsters, and dwarves as inferiors, scorning them as vulgar creatures, and thus, until now, they've hardly had any intermingling with the other races. They are ascetics who value living quietly in the forest without embracing desire, and they view sex in an especially negative light. For that reason, if one of the elves of the village becomes violated by the demonic energy of a succubus, they are extremely sensitive to it. The elf would probably be quickly banished from the village before any of their friends got raped.

The process of corrupting such stubborn, fastidious individuals, teaching them the pleasure they had never known, and transforming them into wildly lustful monsters is extremely amusing to the succubi. Is is said that they view them as the best kind of toys, so many elves have been converted into succubi, and the number of pure elves remaining is dwindling year by year.

At first, they continue to resist as their body undergoes transformation into a monster, but eventually, by receiving a human man's spirit energy, their form is converted into that of a lustful monster. These elves are treated as monsters. After their transformation into a succubus begins, the more they try to resist it, the more lustful a monster they end up becoming. It's almost like the personality of a pure elf is inverted. Their beauty and pride remain as is. They enjoy hardcore sex, and indulge in pleasure, as if their pride as a monster depended on it. Just as when they were a pure elf, they never forget to express their gratitude to a human man after getting exquisite pleasure and nourishment from sweet spirit energy. Instead of praying, they use their hands and mouth to service a man, expressing gratitude through giving him pleasure. They think of their old self as being extremely foolish for forbidding something so wonderful and pleasurable as intercourse with men.

In a complete reversal from their abstemious period when they rejected sex, they despise followers of the order, and other elves who are like their former selves. Now that they're completely monsters, they're extremely fond of human men. They now desperately long for the human desire that they once regarded as filthy to be aimed at themselves. Though their attitude towards human men may have changed, they continue to utterly despise other monsters even now more than ever before. They're always uneasy because they feel like another monster is going to steal away their beloved man.

Antagonism between the dwarves and the elves (MGE1)

The dwarves and elves have been fighting since ancient times, even before the age of the previous demon lord. Even at the present, the fighting still hasn't stopped. The elves despise the dwarves as an inferior race of fools with low intelligence. This angers the dwarves, and they keep responding to hostility with hostility. Now that both races have been reduced to lustful, lascivious monsters, for some reason, both elves and dwarves often tend to take a liking to the same men, and it often leads to a struggle. But now that they're monsters, it doesn't develop into the kind of fight where they spill each other's blood. Instead, they both snuggle up against the same human man. They rub their bodies against the man as though to assert ownership, pinching him between them, and soon begin to call each other names like “erofu” or “pedowarf. [3]”

A type of people that live deep in the forests and build peculiar villages. They're also called “forest elves.” They are a pure and proud race, but they are hard-headed and stubborn. They are ascetic, and extremely negative towards sex and pleasure. They regard humans, monsters, and all things related to sex and pleasure as filthy and inferior, and they despise them. Since they have high magical energy, it's much more difficult for demonic energy to bind to them compared to humans, and monsterization is extremely gradual. They won't completely become monsters just from having sex with monsters. demonic energy arouses their bodies, eventually leading to a state where they have lewd desires and fantasies. Then, upon receiving a man's sperm, they completely change into monsters. Elves are sensitive to magical energy, and at the stage when one has been corrupted by demonic energy, everyone around will notice it, and banish them from the village, so chain monsterization and conversion of elven men into incubi rarely ever happens.

After monsterization is completely finished, they become extremely lustful and lewd monsters almost like a backlash or something from everything until that point. When humans who think of sex and pleasure as dirty things change into monsters, in most cases, that hatred disappears, and they start to recognize it as a wonderful thing. But for most elves, sex and pleasure remain as filthy things along with humans. However, in monster-like fashion, they start to deeply love those filthy humans. As if ashamed of how clean they had been until then, they wish to be defiled with filthy lust and milky white semen, falling to become a being just as filthy as their beloved men. For them, it is an unbearably joyous thing. Just as they were once proud of their purity, it is said they become proud of their filthy, indulgent lives as monster “elves.”

Additionally, there is a matter that is often misunderstood. That is, even if “elves” change into monsters, they don't become “dark elves.” These two races were entirely separate from the beginning.