Plant type monsters which have kelp-like leaves growing all over their body. They give off a dark, gloomy aura and they have quiet dispositions, just as one would expect from their outward appearance. They usually stay fixed to the ocean floor while waving their body’s kelp. Sometimes, they move and float through the ocean while adrift in ocean currents. They can often be seen washed ashore on beaches after drifting on waves, or being pulled up to the surface after getting caught in fishermen's nets.

Since they don't usually move very much, one might assume that they would be docile monsters, but as soon as they get near a human man they suddenly attack by throwing themselves on top and wrapping all their body's kelp around the man's body. Their kelp has a unique stickiness, and once they wrap it around a man it won't easily come undone; so they have sticky sex while gluing each other's bodies together. The bodily fluids secreted from inside their mouth and vagina have the same kind of viscosity. Once they swallow up a penis, they coil tightly around it and refuse to let go. Every time they move their hips it produces relentless pleasure along with wet, muffled sounds, and they seize every last drop of semen released deep inside them. After acquiring a husband in this manner, they become very physically and mentally dependent on him. Even in daily life they have their kelp wrapped around him constantly, and they try to keep each other's bodies as close together as possible. Some among them prefer to cling by being wrapped in their husband's arms, and others prefer to be carried on their husband's back. Most married couples live with each other's bodies glued together in such a manner that it's almost as if the flow kelp is rooted to her husband.

They don't assert themselves very much, but they are extremely hungry for affection, and the dark eyes they gaze at their husband with are always wet with passion. If ignored, they will frequently glue their body to their husband's body, and slimily rub against him, begging for sex. Their bodies have a property that causes them to swell up when they absorb moisture, and not just their kelp; their breasts, buttocks, etc. also swell, changing into a more voluptuous body. Since the amount of bodily fluids secreted will also increase, they will try to discharge it by actively kissing their husband; and besides that, their vagina will be constantly dripping with juices, seeking sex. Since the viscosity of their bodily fluids increases as well, it is extremely difficult to escape from their embrace when they're in this state; if they were to wrap themselves around a man in the middle of the ocean, sex would be unavoidable.

On the other hand, when they dry up and lose moisture, not just their kelp, but their whole body shrinks, and they end up in the form of a young little girl. In this state they will frequently kiss their husband, seeking moisture, and slurp his saliva. They'll also assertively swallow up his penis, seeking to moisten their body with semen. Along with the rest of their body, their vagina will shrink to a tiny size, and it will clamp down even more than usual, squeezing out semen instantly.

Furthermore, they are well known for the fact that a fragrant, exquisite tasting dashi (kelp broth) can be collected from their kelp. Of course their “taste” that charms the tongues of famous gourmets also charms their husbands. Many become absorbed in slurping all over their body, and taste it by directly sucking on the kelp with their mouths.

This time it's the kelp monster girl, “flow kelp”. They're monsters that drift alluringly through the sea and give off a melancholic (*wet) aura, and it seems the girls' personalities are just like that too, wet and sticky. Their bodies undergo certain changes by absorbing moisture or drying up, or something like that...?[1]

TL Note: *湿った Shimetta in one sense means wet, in another sense means something like “melancholy, depressing, gloomy”.[2]

1) Do Flow Kelps have human-like arms under all that seaweeds?

Flow Kelps' arms are made of kelps as well, so they don't have human-like arms. (KC) 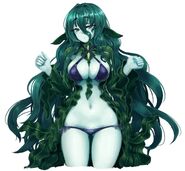 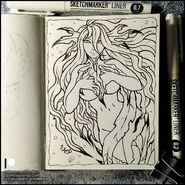 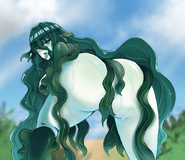