A monster which is a statue that came to life and started moving due to the soul of a fiend dwelling within. Aside from those which were created by a fiend imbuing a statue with a portion of her own soul and mana to employ as a servant, in many cases gargoyles also result from souls coming to dwell in statues by pure happenstance. Also, some have the powerful and wicked fiends of the age of the former mamono lords sealed in them, but as with the fiends of the present, the formerly wicked souls dwelling in the statues have now changed completely into the souls of inma. They await an opportunity to violate human men while masquerading as ordinary statues. The majority of them are only able to be active for a limited time due to the seal or a lack of mana. Basically, during the daytime, they're immobile just like ordinary statues, but when night falls the fiend's soul activates and they start moving, soaring about the night sky in pursuit of prey. When they spot a man who strikes their fancy, they may pretend to be a statue to set up a surprise attack or swoop down from the sky above to try and pin him down and have sex with him. On this occasion, the female body covering his and taking his manhood deep inside will be so soft and warm that it would be totally unimaginable that it was originally cold stone. Gargoyles have a strong thirst for essence, which is required to obtain sufficient mana or free themselves from the seal, so they lash out at men with extremely greedy and violent desire, and during the night their hips will move nonstop.

When day breaks and the sun rises, they return to being immobile statues again. If a man is joined with them in copulation at this time, then the man will also change to stone along with them and be rendered immobile until night visits again. When petrified while doing cowgirl, the man will probably practically appear as if he had become the gargoyle's pedestal.

A man petrified with a gargoyle is unable to move or speak and his thoughts are enveloped in drowsiness as if dreaming, but he is still able to communicate with them, moreover, since he is continuously joined with their body, even if neither of them can move, the pleasure of sex is continually produced. The man will come to eagerly await night as if it is being imprinted in his hazy mind by the mana and pleasure he is being given, and when night arrives, the gargoyle who was eagerly anticipating night just as much as the man if not more so will begin shaking her body on top of the man as if a dam inside her had broken.

After getting a man to be their husband and repeatedly having sex-filled nights, as their bodies become filled with essence, their "nights" grow longer. Once they have enough mana, or the seal formerly placed on them is weakened enough, they finally become able to move freely regardless of day or night; however, having obtained freedom, most gargoyles will want to have sex with their beloved husband as much as they please, and at the same time, they'll constantly mount their husband and indulge in pleasure, perhaps due to it having already become normal to spend their lives joined together. Much of the time they'll even sleep quietly while still joined together after sex, so apparently the image of a statue and pedestal indulging in pleasure will mostly be unchanged.

When the sun rises, the two having sex will become stone. Even during this time, pleasant pleasure continues to flow through their bodies.
Add a photo to this gallery 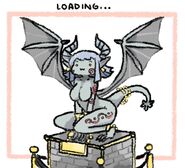 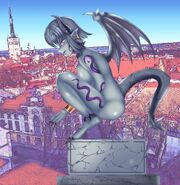 Retrieved from "https://monstergirlencyclopedia.fandom.com/wiki/Gargoyle?oldid=1165566"
Community content is available under CC-BY-SA unless otherwise noted.