A human soul that was bound by demonic energy and transformed into a monster after dying and losing its body.  Since they don’t have enough magical energy right after being born, they lack an actual body and they can’t physically touch other things. Because most of their body is actually formed from the demonic energy, while they keep most of their memories from their lives, they are far more lustful compared to when they were living, although their thoughts are dim. Their minds are stained with “wild fantasies” about having sex with men, which they will likely act on later. In order to make those wild fantasies a reality, they seek the spirit energy necessary to form a body, they wander places such as graveyards in search of their prey.

Since they don't have a body after just having been born, they can’t directly touch humans and when they find a man, they take possession of him and try to suck his spirit energy out little by little. Once they take possession of someone, they are able to forcibly unify their thoughts with those of their host. In this way, they are able to send their “wild fantasies” directly into the man’s mind. The man being possessed will be tortured by the lewd scenes of them that are constantly filling his head.

Eventually, after sucking out enough spirit energy, they materialize and by that time, the man’s head is so full of them that he starts to yearn for them. After obtaining a body, they themselves will be maximally aroused from eagerly anticipating sex with the man, which is their hearts desire, so he will probably gladly have sex with them and end up continuing to offer more spirit energy. Also, when the wild fantasies fill his head, if the man is unable to bear the arousal and temptation, he will masturbate, releasing semen on his own, then in that case, the ghost will immediately take it in and materialize on the spot.

The ghost will be entranced and maximally aroused after getting their first direct taste of semen, they'll use their newly acquired body on the spot to their heart's content and have sex with the man in front of them. Actually having sex with them is even better than in the wild fantasies and it is accompanied by even greater pleasure. By tasting the intense pleasure, their wild fantasies become even more radical, then the actualization of the fantasy afterward becomes yet even more intense.

It is said that “Ghosts return to heaven once their regrets are taken care of.” But their regret and desire is by and large, “I wanted to spend time with that guy I liked and keep fucking him,” the more they have sex, the worse their regrets grow: "I want it more rough." "I want to do it a lot more." For that reason, there has been no confirmation of one actually returning to heaven, we remain uncertain about the veracity of this statement.

Can a ghost, having gained a material body, return to its former state of a disembodied spirit?

Yes, she is capable of it. If the ghost has enough power to gain a physical body, then she can easily pass between it and the spiritual body.

“And then, I put my hands on the desk, and stick my butt out towards darling, and darling surely shoves his wonderful cock in my pussy... hauu ♥” Their wild fantasies know no end.
Add a photo to this gallery 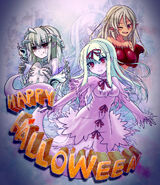 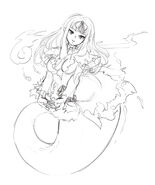 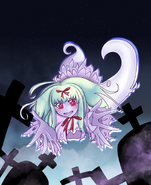 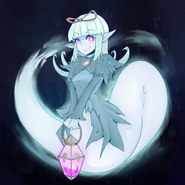 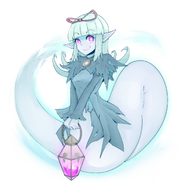 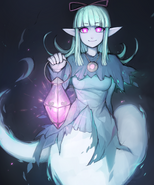 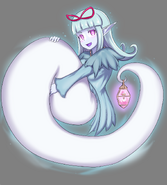 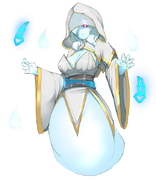 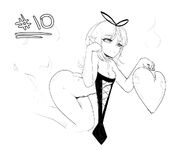 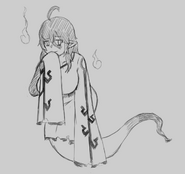