Giant Ants are among the most diligent of monster girls; hard-working colony creatures that toil for their queen. They give off powerful pheromones that serve to bring men to them. These ants (unwillingly) share their colonies with the mooching Ant Arachne, who disguise themselves as giant ants but don't do any work!

A type of insect monster that lives in a group focused around a queen. They dig holes in plains and caves, making a huge nest. Despite their small bodies, they possess a frightening amount of strength. They can easily lift and carry objects much larger than themselves, and they can even dig straight through solid rock.

Besides the queen, the rest of them are called “workers.” They perform a variety of tasks including defending the nest, procurement of food, and expansion of tunnels. During the daytime, most of them wander aboveground in search of food. When they move aboveground they trace their own paths with pheromones. Others follow the trail, and they form a huge procession, marching in perfect unison, and even giant ants that move a bit away from the procession can return in no time at all.

Not only do these pheromones act as path markers, they also effectively act as an attraction to men. Men entranced by the pheromones will join the procession, and disappear into the nest. The ants find a man they like among the men who have entered the nest this way and take him to bed.

They are extremely hard workers. They wake up early in the morning and start their jobs immediately. Throughout the day they work diligently. Because their levels of sexual desire swell with fatigue, by the time they make it back to the nest they assault the men they have taken away and initiate sexual intercourse. Their sweat contains pheromones, and when they come home exhausted, the sweatier they are, the more aroused they become, and that’s not all. When men are showered in lots of these pheromones that give off a thick female odor, they become so unbearably aroused that there’s probably not a man that would refuse them.

Normally the workers have no reproductive capacity, but individuals who have frequently coupled with men have this ability awakened. In such circumstances, the individual will leave the nest with their lover and form a new group and nest, becoming a new queen.

Just after becoming a queen, her lust will become especially high, and she’ll give birth to many children in order to increase the number of working ants. The job of the man brought with her is to impregnate her with numerous children as her husband, so they’ll end up constantly having sex to accomplish this.

By having sex, the queen’s body will become hotter than normal, and she’ll release a huge amount of sweat, so a huge amount of pheromones hang around in the air of the queen’s bedroom. The queen herself and her man will continue to be constantly aroused, and it is often the case that they will have sex all day long. 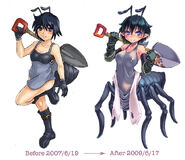 Cutout Giant Ant Censor.jpg
They're very hard workers. They work until they're covered in sweat, and when they come home maximally aroused, it's their husband's important duty to soothe them with pleasure.
Add a photo to this gallery

A card made by safnar (Not cannon) 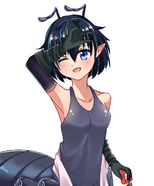 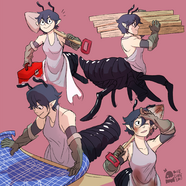 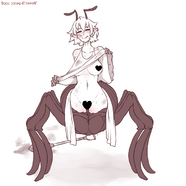 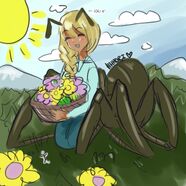 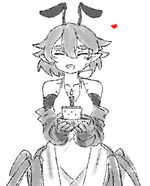 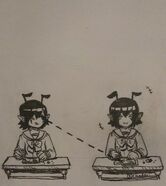 Retrieved from "https://monstergirlencyclopedia.fandom.com/wiki/Giant_Ant?oldid=1178962"
Community content is available under CC-BY-SA unless otherwise noted.