A kind of arachne that lives in the desert. Its lower body resembles that of a scorpion and it has a giant venomous stinger on its tail. It is called “the assassin of the desert.” Even among the monsters that live in the desert region, it is feared as being especially violent and dangerous.

When they find a man that strikes their fancy, just as their name “assassin” would suggest, they approach the man without making a sound and swiftly stab the stinger into him to inject him with venom. Out of all the monsters, the venom they possess is by far the most potent. It is an instant venom that causes paralysis immediately upon entry into the bloodstream, plus it attacks the entire body with heat, especially the lower body, bringing about sexual desire. Furthermore, it forces a man’s body to produce a high volume of semen and makes his penis hard and swollen.

With the man paralyzed, they take him back to their own dwelling and continue to forcibly have intercourse to bear young. Since they continuously inject a man with venom during sex, he never runs out of semen during the whole act and neither does he lose his erection. Because of that, they likely won’t stop mating until either she becomes satisfied, or he passes out.

After experiencing this a number of times, the man's penis will grow harder, thicker and larger as he is injected again and again with the venom and it'll become able to slip deeper inside her. The arousal and pleasure caused by the venom never dulls. On the contrary, the more a man is stung, the more the intensity of the resulting pleasure increases.

Furthermore, they are very sadistic in nature; since they get such pleasure out of it, they’ll probably keep fiercely injecting the man with venom during sex even if he is willing. Also, how much their sadistic nature reveals itself is proportional to how much they actually care about the man they’re with. So when they’re with a man they like, they start frequently stabbing him with the stinger as an “expression of affection” and will probably end up mating with him more frequently and furiously.

As for the body of a man who's been frequently injected with their venom, eventually even his nerves will be violated and changed by the venom. Being pierced by the stinger and injected with venom will end up being processed by him as pleasure rather than pain. Even if venom isn't injected, just being touched by them will be enough to make the penis swell up so stiffly and hugely that it's painful and the man's breathing will grow rough as he anticipates being ravished by them.

Even though they are called “assassins,” in the same way as other monsters, they won’t actually take a person’s life. No one ever dies from their venom. But a man caught by one of them cannot easily escape and they generally end up living together, so in actuality, it’s certainly difficult for him to ever return alive to the human settlements.

In front of them, a man's penis never loses strength. The erection will remain towering indefinitely to provide them with semen.
Add a photo to this gallery 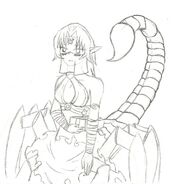 Quick Girtablilu fanart by TheToxicGemstone. The scorpion half is based off an Arabian Fat-Tailed Scorpion. 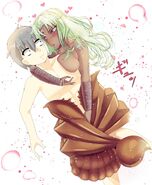 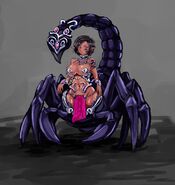 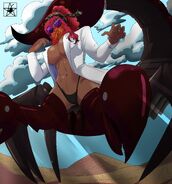 by Manny-G-Estella
Add a photo to this gallery

Retrieved from "https://monstergirlencyclopedia.fandom.com/wiki/Girtablilu?oldid=1162869"
Community content is available under CC-BY-SA unless otherwise noted.