Golems are artificially-created monster girls, born when a clay doll is animated by magic and Demonic Energy, and programmed by the runes inscribed upon it. While it may seem strange that monsters would build more rivals for men's affections on purpose, these golems serve a specific function. Since some monsters are unable to acquire husbands so they can have Spirit Energy to feed upon, these golems are created to "milk" human men and bring that spirit energy back to their owner.

Despite this, golems have a critical weakness: the runes that define them can be scraped off and rewritten, thereby allowing one to take control of another person's golem and reprogram it to follow their commands.

However, regardless of their original purpose and artificial origins, golems are still monster girls by nature. And because of the demonic energy that powers them, they still seek to love and copulate with men, even if they aren't ordered to. Due to this, once a golem has found a man to love, this strong emotion will override her programming. This will make her immune to any further attempts to reprogram her to betray her beloved husband.

A doll typically made of clay, stone or mud, that has had life breathed into it using sorcery. Golems can have a variety of abilities depending on their purpose, however, these golems are monsters powered by a Succubus' mana, and they’re specialized for copulating with men and milking semen. Their purpose is to assault men, store up semen, and then bring a portion of it back to someone.

Lacking a fixed habitat, they go to human-inhabited areas and assault human men, forcibly having sex with them. Their thought circuits are innately written with knowledge of lewd techniques specialized for pleasuring men and milking mana; due to the succubus' mana, their bodies feel soft and warm to the point that it's hard to believe they're actually made of stone and mud.

Whether or not he is willing, they use brute force to hold down a man, and all parts of their body are designed for milking spirit energy. When they take a man inside, their lewd brain deduces the most optimal method to make the man pleasurably ejaculate. The method is selected from among the numerous succubus (inma) techniques it possesses based on the man's individual criteria, ensuring that he will ejaculate a large amount of semen inside of them. They have a mechanism inside their body that stores spirit energy and once it becomes full, the man is released and the golem returns to its original creator.

However, if a man doesn't resist much at all, the golem’s thought circuits will recognize that "it's easy to collect semen from this target." On the other hand, even in the case that he does resist, the more difficult it is to milk him, the more carefully her thought circuits will record the taste of his spirit energy and his information. In most cases, after delivering the spirit energy to her creator, she'll soon go back to the man for more sex.

When attacked by a golem, one should use something to scrape off the runes engraved on part of its arm. These runes contain information about its owner, and the details of its orders, and if one erases them its orders will be cancelled at the same time, and the golem will cease functioning. Additionally, if one has knowledge of the runic alphabet, by overwriting the owner’s information with his own name, he can gain control of the golem. The runes also contain data concerning the golem’s personality settings, and more, so by overwriting it, character and disposition can be freely modified. However, all these measures are only effective with golems shortly after birth.

Golems were essentially emotionless in the age of the former Demon Lord, but the current golems are powered by the succubus' demonic energy. So, as if influenced by the lustful and loving nature of the succubus, after continually copulating with a human man over a long period, emotion may be born.

After falling in love with a man, golems will erase their own runes and overwrite them with the name of the man they’ve fallen in love with. This emotion is different from orders that come from runes. For example, even if her orders were erased, she would continue to move of her own free will, and even if someone else were to erase the name of the man she loves, overwriting it with their own name, and then write in orders to harm the man, she would follow the orders of her own heart, not the runes. She would soon change the overwritten runes back to the originals, and then she would try to eliminate the enemy of her beloved husband whom she loves from her heart and serves.

TL Note: All references to succubi use the term "sakyubasu" that specifies the races KC calls "succubus," aside from the one reference to "inma" (another, more general term for succubus in this setting) that is noted in parentheses.

Remade Golem
Add a photo to this gallery 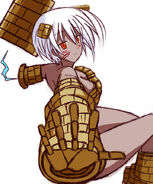 By [Nav]
Add a photo to this gallery