A dark beast that has both the wings of an eagle and the lower body of a lion. They inhabit secluded areas deep in the mountains and the vicinity of desert ruins, and were once given a duty by the gods to protect their treasures sleeping within the ruins, or the ruins themselves. Even in the present, they adhere to those duties and continue to protect the treasures.

Their dispositions are extremely wild and ferocious, and they'll mercilessly attack and attempt to drive away anyone who approaches the treasures they guard no matter who it is. They also have prideful and daring personalities, and it is said that they have even fought and driven away "dragons" who came to collect treasure. And so, they look down on humans as greedy tomb raiders who are after the gods' treasures, and display a haughty attitude.

However, they are also firmly endowed with the monster's instinct to seek human men. Even before they changed into their current form they were sensitive towards the desires that humans possess; and due to that they're both able to sense the presence of tomb raiders, and have had a habit of being more ferocious towards them the higher the intensity of the raider's desire. In the present, their ferocity towards men has changed from bloodlust to obscene carnal desire, and the stronger the desire possessed by a man is, the stronger their lust towards a man will grow, and they'll be dying to ravish him.

Usually other arrogant monsters regard humans as lowly creatures and hesitate to have sex with them, but that sentiment is nowhere to be found in the griffon's case; they suddenly attack and attempt copulation without hesitation. They swoop from the sky and pin men down, and there isn't any way to prevent it.

In the blink of an eye, they'll be straddling a man, and as expected, they won't hesitate to take his penis deep inside and shake their body with furiously wild hip movements. As the desire of men naturally leads them to come after the treasure, so too do the griffons enjoy the pleasure of violating and subjugating such insolent men according to their own desire.

However, while continuing to have sex like that, a change will come over the two. Because she is a monster, the griffon's body will charm the man through sex; his desire towards the treasure will diminish, and instead, his desire to have sex with the griffon will swell. Just like materialistic desire and the thirst for wealth, it will fan the flames of her ferocity; however, desire directed towards the griffon herself will raise not only carnal desire, but the monster's female desire to couple with the male. By providing her husband pleasure with her own body, which results in her husband desiring her even more, she'll experience ecstasy and a rapid heartbeat unlike anything she had ever felt before; she'll lose control and become engrossed in having sex with her husband.

Sorry for the lengthy time between updates!

It's a race that was formerly ordered by the gods to guard the treasures that sleep in ruins. Even now that they've become monster girls in the present, they lie in wait to violate greedy men who go after the treasures. I have a feeling the meaning changed from ancient times, but it's probably my imagination! [1] 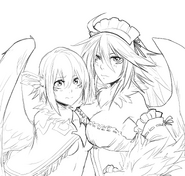 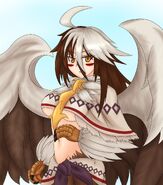 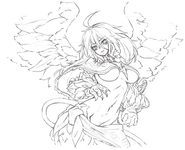 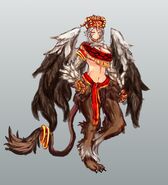 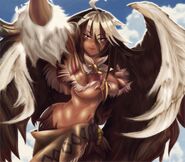 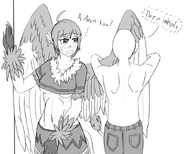 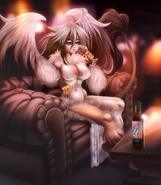 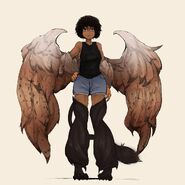 by Peachy
Add a photo to this gallery

Retrieved from "https://monstergirlencyclopedia.fandom.com/wiki/Griffon?oldid=1187242"
Community content is available under CC-BY-SA unless otherwise noted.