A type of beastman with the characteristics of a bear. They are normally dopey, but when it comes to attacking human men, they are dangerous monsters that exhibit freakish strength and unbelievable speed. Their favorite food is alraune nectar, especially the sweet honey it becomes after it is processed by honey bees. They frequently attack alraune and honeybees to lick this honey, all while their faces and paws get covered in the sticky honey.

They enjoy the sweetly melting taste of honey. Because of this, honey thoroughly soaks into their right paw which they typically use to eat with. Their right paw always gives off the sweet scent of honey and if they lick it, the taste of thick, sweet honey will spread through their mouth. They are ordinarily calm and dopey, but sometimes they get turned on from sniffing and licking the scent and flavour that has soaked into their paw. This turns them ferocious, after which they will attack human men.

Their bestial olfactory sense can sharply detect human men and depending on the circumstances, they may come into human settlements and knock down men with their freakish strength and unbelievable swiftness. A man seized in their arms will be forced to sniff the fragrance of the honey up close, causing his thoughts to become vague. Then while he is unable to resist, he will end up having sex with them, having had his body and mind melted away by the honey in the same way. Even right in the middle of sex, the fragrance of the soaked in honey will continue to linger. As they have more and more sex, they succumb to the pleasure even more, their arousal increases and they become more ferocious.

When they end up stained pure white in a man's semen, they finally return to their normal dopey state. However, after growing fond of the feeling of hugging a man, they will hold him dearly within a firm embrace, using their huge arms to hold him close, after they will bring him back to their den. Normally they are very calm and men carried off by them will be treated very gently and carefully.

Usually they affectionately stroke their man and embrace him firmly between their breasts. Also, when they sleep, they embrace their man the same way as a little girl sleeping with a plush toy, all while enjoying rubbing their face against him. However, once they get a lick of honey, or their honey soaked paw, they quickly change back into a ferocious beast like when they were first encountered, to which the man will end up getting fiercely violated.

Furthermore, it is said that if one encounters a grizzly, one way to deal with it is this: "if you play dead, they will let you go." This is a mistake. If a man were to actualy throw himself down on the ground in front of them, from their perspective, it would only look like he was laying down as an invitation to mate. Thinking that the man welcomes their advances, they would probably joyfully rush him. 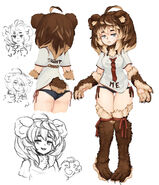 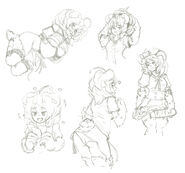 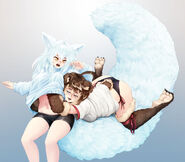 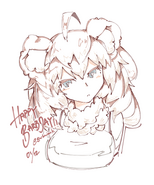 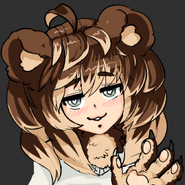 by Udetamago
Add a photo to this gallery

Retrieved from "https://monstergirlencyclopedia.fandom.com/wiki/Grizzly?oldid=1162876"
Community content is available under CC-BY-SA unless otherwise noted.