The original race of the harpy family, harpies are cheerful, airborne monster girls. Much of the time they tend to be helpful to humans rather than the rape-frenzied danger that many other monster girls represent, as their aggressive lusts are mostly confined to mating seasons. This rather un-monster-like behavior of not chasing dick 24/7 was viewed with exasperation by the Queen of Hearts, who created the jubjub subspecies instead for Wonderland.

The representative monster for the harpy family that has the body of a woman, with big bird-like wings. It’s the basic race that’s most commonly seen among the diverse harpy family of monsters. Their bodies are light and small for flying through the sky, spreading their large wings allows them to fly freely through the sky.

Most of them have bright, cheerful personalities, actively calling out to humans passing through mountain roads, carrying peoples’ baggage, and so they also have good relations with humans. In countries that have advanced relations with monsters, it is said that they run shipping businesses, and they’re even adapting to human economics and society.

However, when mating season comes around, it’s suddenly a different story. In this period, they change into typical monsters. Assaulting human men, they try to milk semen and conceive children. Their focus becomes all about having sex with men and it’s the driving force behind their behavior.

They ambush men who strike their fancy, suddenly swooping down from the sky and using their bird-like feet to snatch them up and carry them back to their dwelling. And then, inside their nest, they become female monsters that just seek males intently, having intercourse with men who are their males.

When they straddle a man, their eyes change into those of a raptor glaring at its prey. They rock their tiny hips back and forth wildly while flapping their huge wings, tasting their man.

During mating season, men who they normally get along well with are especially likely to get kidnapped and raped by them, so one should be wary. When they see them on top of themselves shaking their hips, the men who get kidnapped finally realise that they have been after them the whole time, occasionally looking upon them as the prey and smiling lewdly.

Once mating season is over, they go back to their original cheerful, friendly personality, but after having had sex with a man, they’ll fawn over him and become much clingier than before, and they’ll start to seek sex even when it’s not mating season. When they fawn over a man and gaze at him with nothing but love in their moist eyes, different from how they look at men like prey during mating season, the man will find it unbearable, and he’ll likely push them down and have sex. 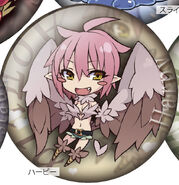 They're extremely ferocious during mating season. They suddenly swoop down from the sky in order to feast on their beloved prey with their bodies. 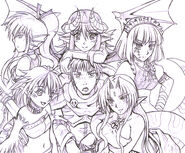 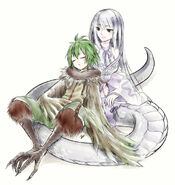 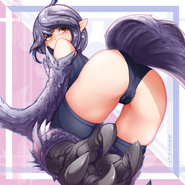 by Reinaba
Add a photo to this gallery

Retrieved from "https://monstergirlencyclopedia.fandom.com/wiki/Harpy?oldid=1189383"
Community content is available under CC-BY-SA unless otherwise noted.