A mouse monster native to the Mist Continent. They have a coat of bright red flames and can tolerate intense heat without burning. They are overly confident and pugnacious, having a disposition almost as intense as fire. Even though most of them have a small body, they excel at martial arts and when they spot a man who also has knowledge of martial arts, they'll assertively challenge him to battle.

Their flames ignite the hearts of those exposed to them, arousing their fighting spirit. Since those who've been challenged to a fight by them have their fighting spirit seared by these flames, they become unable to avoid fighting her. Unlike other monsters, they don't show much interest in having sex with men, and even act as though it disgusts them. Even in the case of winning a battle with a man, they'll mostly be satisfied with just that, and leave.

However, in the case that the man wins, his fighting spirit that had been ignited by their flames will then change into lust that burns with just as much intensity, and it will be directed towards them. If that happens, a man will end up giving in to his burning urges and rape them.

Water is their weak point, and when they have a lot of it poured on them, the flames of their coat temporarily weaken, and the color changes, growing whiter. Along with that, their fighting spirit and violent temperament are also lost, and their timid nature that had been hidden by the flames becomes exposed. The liquid that contains lots of male spirit energy, that is to say, semen, is even more highly effective. Even if they verbally refuse, their body will accept the spirit energy, and each time spirit energy is poured inside, their flames will weaken for a time, and they will reveal the submissive and adorable side of themselves.

They're covered in their own flames which rouse their own spirit. The reason they don't show any interest in sex in spite of this is that they release all of their arousal through fighting. The "monster" within is always smoldering but if they have sex with a man and their body learns the taste of the man who is their husband, their flames flare up to such a degree that they can't be relieved just through fighting, and then they'll feel passionate desire towards their husband.

During sex, part of their flames will transfer into the body of their partner like a spreading fire, and he'll be able to temporarily drape himself in this 'Hinezumi coat'. It is said that the coat of flames grants the wearer high resistance to fire and heat, and heats up and activates the body, allowing the constant utilization of the maximum extent of his power. Additionally, it also enables the feat of covering one's fists in flame, and in the mist continent it's not uncommon to see a couple of fighters, a hinezumi and her husband, covered in flames together.

However, being draped in flame also has the effect of causing constant arousal, and that arousal will also be directed towards the original owner of the coat, the hinezumi. Of course, if lacking an opponent to fight, he'll lash out at his mate, the hinezumi, with that arousal.

This time it's the mouse monster with a coat of flames originating from the mist continent, “hinezumi”-chan. Depending on the time and circumstances, the coat may be fluffy, or it may become like real flames. They're the “enticing uke” type. * In Japan, the “hinezumi coat” familiar from princess Kaguya's unreasonable demand is more famous than the hinezumi itself. * In the world of the encyclopedia as well, presenting the coat of a hinezumi would be unreasonable! That's how it is.[1]

TL Note:"Enticing uke" = “sasoi-uke” meaning a submissive in a relationship who uses her words or gestures to entice a partner into sex. "Kaguya's unreasonable demand" refers to a story in Japanese mythology where she requested the coat of a fire rat. 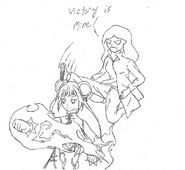 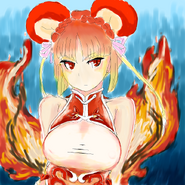 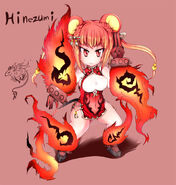 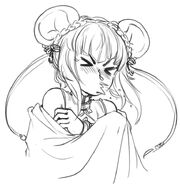 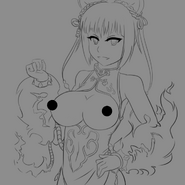 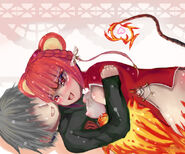 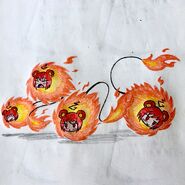 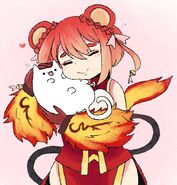 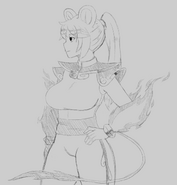 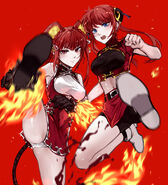 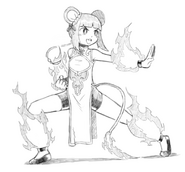 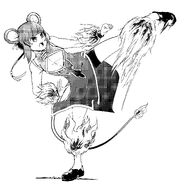 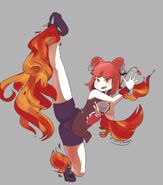 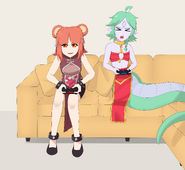 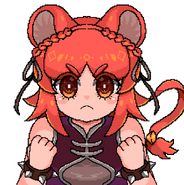 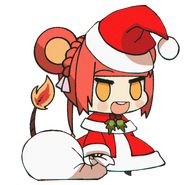 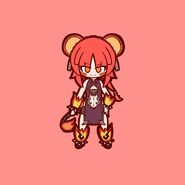 by Nuggets
Add a photo to this gallery

Retrieved from "https://monstergirlencyclopedia.fandom.com/wiki/Hinezumi?oldid=1209909"
Community content is available under CC-BY-SA unless otherwise noted.