The Holstaur, sometimes translated Holstaurus, is a placid monster girl species mainly known for their ample mammaries. They are a subspecies of Minotaur that produce ample quantities of a special milk: a delicious beverage that is used for both cooking and refreshment in the Monster Girl Encyclopedia world. It is one of the few monster products that does not contain large quantities of demonic energy, so it is even found in some Order marketplaces. They are generally content with living a submissive and laid back life, but they have retained the minotaurs' peculiar reaction to the color red.

A Beastman monster that has the characteristics of a cow, and a peculiar black and white fur. It's a subspecies of Minotaur, and through the process of evolution, their violent nature has subsided. These are the ones who chose the path in life to live by obeying humans. Different from Minotaurs, they have a gentle personality and almost never attack people.

However, just like Minotaurs, they're not deep thinkers, and they're spaced-out much of the time. Other than when they eat or have sex, they mostly sleep. A wild Holstaur is always looking for a man to become her husband, and once she's found a man she likes, she lives with him in a human settlement, or nearby area.

On a fundamental level, they respect the will of their husbands, so even if you turn her down, it won't be a problem. However, while they may be docile, they're still monsters that possess an inhuman amount of desire. Continue to ignore them for too long and eventually they won't be able to take it anymore. If this happens, these docile monsters will turn ferocious and assault their husband, forcibly having intercourse with him, and they won't become docile again until all their pent-up sexual desire has been satisfied.

Also, just like the Minotaur, they will become aroused if they continue to see red. Once aroused they will turn violent, as though they are remembering their true nature as a monster, and they will attack human men just like the parent species "Minotaur". In the same way as a Minotaur, even in this enraged state, the monster's instinctive desire for her husband remains strong, and in the case of those that already have a husband, if they see something red and enter a state of arousal, it is said they'll charge off at full speed heading towards their husband no matter how far away he may be.

Even if they haven't given birth, they can still produce milk from their breasts. Not only is this milk highly nutritious and delicious, it also has a stamina-boosting effect. Demand is high among both humans and monsters, so it's a fast selling commodity. They mostly just eat, sleep or have sex, but if living with a Holstaur, the milk alone will be sufficient to support a couple's lifestyle.

They're proud of their breasts, and they can freely change the shape to please the man they love by gently enveloping his manhood and sweetly melting his mind with pleasure. 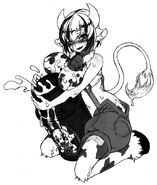 On the cover of World Guide 2 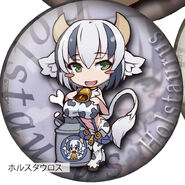 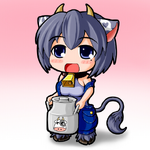 A fan made card by safnar 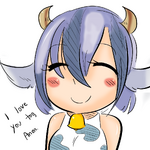 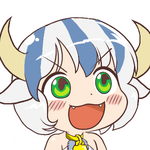 Quick sketch of Holstaur Ellie while at work.

Ellie has milk. Do you?

But the cream rise to the top... 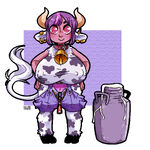 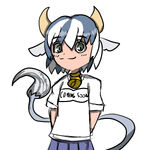 Retrieved from "https://monstergirlencyclopedia.fandom.com/wiki/Holstaur?oldid=1166156"
Community content is available under CC-BY-SA unless otherwise noted.