Large bug type monsters, even among the bee family. Just like other bee family monsters, they make nests and live in groups centered around a queen.

Even for members of the bee family, their disposition is extremely ferocious and they fly around in search of prey and human men throughout the day. When they spot prey, they stop its movements with their spears, which are painted with paralyzing poison and then take them back to their nest.

Additionally, the stinger on their abdomen can be used to inject a lewd venom that incites sexual arousal in human men. Perhaps because they've always got this lewd venom stored in their abdomen, they're often unbearably horny and they're dying to rape a human man. For that reason, when they spot a human man, they gleefully fly at him and after stopping his movement with paralyzing poison, they inject him with the lewd venom from the stinger on their abdomen, capturing the man with these two venoms. Then with a man in sight, in order to sooth their even more violently throbbing body, they rape the man thoroughly until satisfied.

After that, once they've had their fill, in the case that the queen is unmarried, the man will be taken back to the nest as a candidate. A man luckily chosen by the queen will get to spend his life being violated by the queen every day, but the ownership of men not chosen as her husband transfers to the workers that brought the men in. It brings joy to their hearts when a man they've violated thoroughly enough to remember the taste of his spirit energy becomes their own. When they think about being able to spend every day violating the man, it makes their body tremble with anticipation and happiness. Naturally they then take the man to the personal room given to them and release their happiness and anticipation by crashing into the man's body with all their strength.

Furthermore, in the case that the queen has a husband, there's no longer any need for them to bring back men, but in that case, they can just skip the whole selection process and do as they please with the men they capture. For that reason, their search for men becomes even more active.

Also, they get along badly with "honeybee's" from the same bee family and they can often be seen fighting over the same men. One on one, the hornets are stronger than honey bees by far and there's no way they'd lose, but when honey bees come in large numbers, they get pinned down. After having their entire body covered in Alraune Nectar and getting teased all over their body, the pleasure brought about is so intense that they become unable to do anything to fight back.

Hornets who have had that happen to them are then brought into the honey bee's hive where they continue to be immersed in even more nectar and pleasure, they're made to thoroughly savour the sweet pleasure of honey bees. In this way, honey bees change hornets to have a gentle personality preferring sweet sex with men almost like a honey bee. These hornets eat Alraune Nectar with the honey bees and maintain their body. On top of this, since they've become gentle, they no longer inject men with lewd venom and it starts to violate their own body, changing it to become even more lewd and sensitive. In this manner, a hornet with a body and heart melted by pleasure is made to be even more sweetly and lewdly tempting to men than a honey bee. 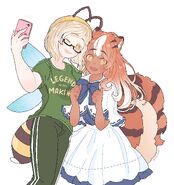 Retrieved from "https://monstergirlencyclopedia.fandom.com/wiki/Hornet?oldid=1162891"
Community content is available under CC-BY-SA unless otherwise noted.