The love of human men

Houris, like the angels and valkyries, are celestial servants of the Gods and are not naturally counted amongst the monsters. A subspecies of angel specifically devoted to Eros, Goddess of Love, houris were first mentioned several years before their actual profile introduction, in the Fallen Maidens section on their patron goddess. Rewarding followers of the goddess with sex and matrimony, they give off a permanently virginal aura much like the Alice. Houris represent an unusual entry in the encyclopedia, because while they can be monsterized by demonic energy into nymphomaniac versions of their original selves, those original selves are extremely sexual already, to the extent that Wandering Scholar can't really tell the difference between monster and non-monster houris.

Lower rank angels that serve the goddess of love, "Eros". Being angels, their hearts are filled with overflowing love. Their personalities are kind and gentle, and they have a sweet disposition. It is said that all that comprises them is pure, not only their beautiful figures and hearts, but also even their excretions such as saliva and sweat. They monitor humans from Heaven, and when they notice a man exhibiting endearing virtues or performing good deeds, almost like a maiden in love, the love they direct towards their future partner continues to swell.

If they descend to Earth under the goddess' commandment, they will become the man's wife and take care of all his needs, offering all the love they had nurtured up until then. As if to embody the goddess' teaching that "good deeds will be met with good love", every bit of their speech and conduct including the manner in which they serve their husband is that of a devoted, ideal spouse overflowing with love and consideration for her husband. Touched by such a deep expression of love, their husband will be constantly enveloped in a sweet mood of happiness. They are also occasionally dispatched to save men seeking love who have been unable to obtain it. There are also many male adherents who accumulate good deeds on the basis of this belief, seeking salvation from the goddess of love.

As far as these angels are concerned, sex, which is a mutual and loving physical exchange, is one of the acts they hold in greatest reverence. While immersed in a sweet life together it will be unclear on who initiates it, but the two will eventually end up seeking one another and having sex. They are regarded as "eternally newly wedded brides", and it is said that their body, which is for offering love to their husband and being showered in their husband's love, will always remain young and vivacious; and no matter how many times they have sex, it will remain fresh, and they will never tire of it.

It's not just in the physical sense, in a psychological sense as well as their enthusiasm for love and sex never fades. They are always passionate towards their husband; for example, even if they end up having sex on a daily basis, the joy and ecstasy induced will be as if it were their first time having sex, and they will exhibit the behavior of a virgin, experiencing palpitation and embarrassment. As if affected by it, the husband will also experience excitement as if he is having sex with them for the very first time that they do it. When living with them, the sweet atmosphere between husband and wife will never disappear.

They are easily drawn to men who accumulate good deeds, and sometimes multiple houris will love the same man. 72 houris married with a certain man who was called a saint, and there are records remaining that say he continued to do good while leading a lifestyle where there is not even time for his penis to dry. Also, they say the souls of women who were deeply in love, but died before they were able to express their feelings to their beloved, and women who are separated from their beloved husband by death are sometimes reincarnated as houris at the hand of the goddess of love. They possess the memories of their past life, and by becoming an angel of love, the love in their bosom deepens; it will be directed towards the man they had feelings for in their past life.

Furthermore, they are not monsters, but fully-fledged divinities. Like others such as "angel", there are also some monsterized individuals, but whether or not they are monsterized has very little effect on their mode of life, so it is often not distinguished.

This time it's houri, an angel that serves the goddess of love Eros. In terms of rank, they are lower rank angels equivalent to "angel." They have personalities filled with love, and it seems they appear before men who accumulated good deeds, or love-starved men. In the source material houris have the distinguishing trait of being “eternal virgins”, but the encyclopedia already has alice, so, it seems the encyclopedia houris have become another kind of “eternal ○○”.[1]

TL Note:○○ represents two unspecified characters. The two characters are given in the actual profile as 新妻 "new wife" which are translated as "newly wedded bride" in the profile.[1]

Since their appearance does not change during monsterization, this does not happen. 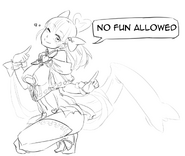 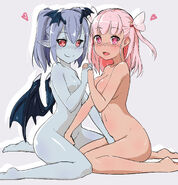 Devil and Houri, artwork by ＿ 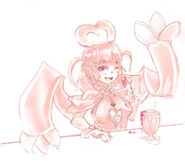 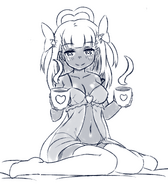 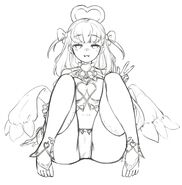 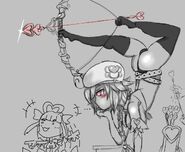 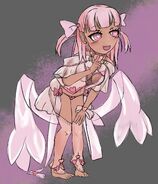 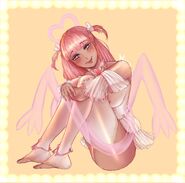 by AzzyArts
Add a photo to this gallery

Retrieved from "https://monstergirlencyclopedia.fandom.com/wiki/Houri?oldid=1177806"
Community content is available under CC-BY-SA unless otherwise noted.