A variety of Slime unique to Wonderland. Men who wander into Wonderland may find big eggs suddenly dropping in front of them from above, and the next thing they know these girls will fly out from inside the broken eggs and attack them.

In actuality, these are Jubjub eggs. If a human man approaches before they hatch, they won't be able to stand waiting to be born, and they change into another kind of monster while still an egg so they can have sex with a man immediately. Perhaps because they were originally eggs, they are divided into two parts, a slimy yellow yolk with the form of a very young little girl surrounded and covered with a white slime with a high degree of transparency.

They're like newborn babies, but just like Jubjubs, they're in heat from birth. Or rather, they're already in heat even before they're born. Perhaps for this reason, their mental structure is different from that of ordinary slimes. Even more than they crave a man’s semen, which is basically their food, they have a tendency to seek sexual intercourse itself with a man. They target men and drop down cracking their own shells, and in the same way that baby chicks recognize whoever is in front of them when they're born as their parent, they recognize the man before their eyes when their shell cracks open as their husband, and direct their lust towards him without hesitation.

They will try to use their body parts to seize him, bind him, and copulate. They can solidify their egg white and make it like an egg shell, and should a man put up fierce resistance, they'll use that to bind him more strongly. Depending on the circumstances, they may cover all around themselves and their man with their shell. The result will be like a rocking cradle, but aside from the wet noises and cries of ecstasy, at a glance it won't look like anything but an enormous egg.

Being Slimes, they have a body that enables them to have sex with men the moment they're born. They're skilled in wrapping their tongue around the penis and sucking on it to suck out semen with their mouth as if suckling milk from their mother's bosom. The yolk with the form of a jiggly little girl is always stickily melting so as to be able to receive a man at any time, and even though they don't know about anything else, they will shake their hips and enjoy the pleasure, and they will learn the rapture of released semen melding into their body.

In this manner, the first thing they will do as soon as they are born is to have sex with their husband. And that is what they will continue to seek for their entire lives. The first voice that they let out isn't a cry, but an alluring moan. They don't even know language at first and the first words that will come out of their mouth will be their husband's name, and numerous dirty words used during sex.

The Slime Jelly that can be collected from their yolk part has a flavor and taste similar to eggs used for food. It is very nourishing, and has a nutritional fortification effect. The body of a man who eats it will produce so much semen that if he does not ejaculate, it will just leak out in a sticky mess. It is purported that if one feeds it to their husband while having sex, no matter how many times he is milked, he'll never run out of semen. It is highly popular as an ingredient in sweets in Wonderland.

Additionally, they do not divide. Instead, they are the rare Slimes that lay eggs. Jubjubs are born from the eggs, but there is a higher probability that they will become “humpty eggs” than eggs laid by Jubjubs.

It seems sometimes suddenly something like an egg will drop in front of men who wander into Wonderland, and the ones that jump out from inside are these monster girls called “humpty eggs”. It seems that to put it more accurately, “they aren't in heat from birth”, they're “in heat from even before they are born”.[1] 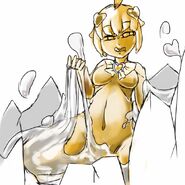 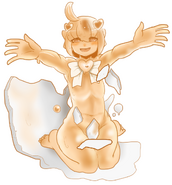 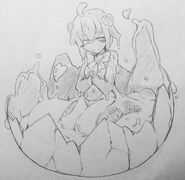 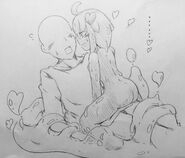 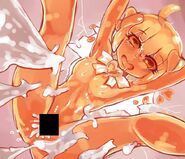 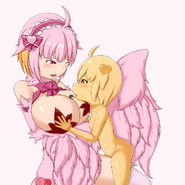 Fan Art regarding Humpty, by 狐虎ぬえ 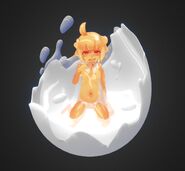 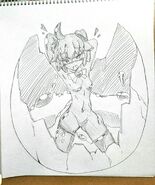 Retrieved from "https://monstergirlencyclopedia.fandom.com/wiki/Humpty_Egg?oldid=1175577"
Community content is available under CC-BY-SA unless otherwise noted.