A minor demon native to the demon realm. In recent times they have adopted the lifestyle of the succubi, feeding on the spirit energy of human men, due to the Demon Lord's influence. They are like children on both the outside and inside, but despite that, they are extremely lustful. Since they are so childish and simple, they are very direct with their emotions and desires and they aggressively assault human men in pursuit of pleasure. They mostly act in groups and upon spotting a human man, they will swarm over him in a scramble to be the first to copulate. The man will helplessly have the spirit energy squeezed out of him.

Since they are minor demons and their personalities are so simple, they are comparatively easier to deal with, and from ancient times they have often been used as familiars by sorcerers and witches. In the case of male sorcerers, forming a contract and employing an imp by periodically offering the spirit energy they feed on is a simple affair.

However, if they are given too much spirit energy, their demonic energy will rapidly grow powerful and the power of the contract will fade. As this progresses they will become less and less inclined towards doing as they are told. Eventually, the relationship between master and minion will be reversed. The imp will become the mistress, and the man will end up as a familiar. A man that had ended up as a familiar will be unable to oppose an imp seeking his affection. He'll give in to her obscene begging and have sex with her, continuously providing his mistress with spirit energy.

An individual imp is not very strong, normally, but sometimes there are those referred to as "arch imps" which possess immense magical power. Just like imps, they look and think like children, but they possess an abnormal amount of lust and power. They are dangerous beings endowed with charm spells and techniques for pleasuring men that are even greater than those of the succubi. If men who end up as their familiar continually provide them with spirit energy, eventually they will change into these arch imps, and then things will get even more out of hand. 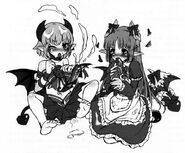 An Imp and an Alice enjoying Licking Fruits.

Imp in a meadow

Monsters are insatiably hungry for semen. Even if they swell their womb up with it, stuff their cheeks full of it, and have their entire body covered in it, they'll still be dying for more of your semen.
Add a photo to this gallery

Retrieved from "https://monstergirlencyclopedia.fandom.com/wiki/Imp?oldid=1178691"
Community content is available under CC-BY-SA unless otherwise noted.