A bizarre monster inhabiting the Zipangu region that has a cotton-like body. They mainly appear at dusk, fluttering in the sky. It's very difficult to tell what they're thinking: they may attack when they spot human men, they may just fly around in the sky, and sometimes they space out when they get stuck on something.

When they fly up to a man on a whim, they will bind him by wrapping around him with their cloth body and attempt to have intercourse. At a glance, it looks like they only have a body of thin cloth, but as soon as their cloth coils around and clings to something; it makes the outline of an alluring woman's body emerge on the other side. Nothing should exist on the other side, but it certainly does feel as though a woman's body really exists from the feeling one gets as one's fingers sink in when touching over the cloth. In fact, it's all just the use of demonic energy and the cloth body to recreate the resilience, feeling, and weight of a woman's body. They skillfully produce a body by winding their own cloth with their demonic energy.

For that reason, sensory organs and so on are on their cloth part, which is their original body. Unlike an ordinary woman's body, the cloth body doesn't have different functions and sensitivity in each part. As for the woman’s body created by winding cloth, the vagina, mouth, breasts, and buttocks are of course semen milking organs and erogenous zones for pleasuring and making love with men, but so is the rest of it, including even the face, hair, armpits, belly button, etc. The cloth has such an exquisite feel to it that men who are their husbands unanimously claim that they spontaneously get the urge to rub cheeks with them, and it really shows its stuff when it comes to fondling men. If the body is rubbed, unlike other cloth and human skin, while it is still soft and smooth, there is also a feeling like occasionally getting stuck that produces stimulation which induces pleasure in a man's body.

If one inserts his penis in the area formed by triangular creases which corresponds with the vagina of an ordinary woman's body, even though it's over the cloth, there’s a feeling of heat and wetness as the penis plunges inside as if it were real. When taking in a penis, the cloth changes shape to match it, and when they rock their hips, at the same time, the cloth enveloping the penis can freely stroke it. This results in a two-fold pleasure that‘s like being milked by a vagina and caressed at the same time, which causes most men to ejaculate at once, staining their cloth with cloudy white semen.

Since it's made of cloth, a man's semen will easily soak into their body, and any spot on the cloth, any spot on their body, can absorb semen with extremely high efficiency. For that reason, even though they may look silly when wrapping their cloth body around their husband and sleeping happily, or swaying with just a bit of their cloth fastened to their husband, they do possess high magical power from having sex with their husband again and again, and despite appearances, no small number of them are great yokai.

When monsters obtained their current female bodies, the ittan-momen ended up with a half-baked body made of cloth, but it seems they themselves are actually very pleased with their form. What they say is that since their thin cloth body can easily soak up semen, they can easily have their husband‘s semen permeate through their entire body, literally staining themselves completely with their husband so they can immerse themselves in happy feelings all the time.

This time's monster girl is an odd race! It's “Ittan-momen”-san, the youkai with a fluttering cloth body. It's a strange monster that at a glance looks like a thin cloth body, but when touched or embraced through the cloth, the soft feeling of a woman's body is definitely there.[1] 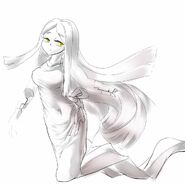 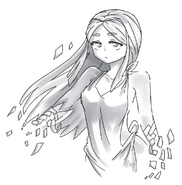 by Butter-t
Add a photo to this gallery

Retrieved from "https://monstergirlencyclopedia.fandom.com/wiki/Ittan-momen?oldid=1162908"
Community content is available under CC-BY-SA unless otherwise noted.