A kind of undead that is unique to the mist continent. When the peculiar demonic energy enshrouding the mist continent comes to dwell within a corpse, it is raised as a jiangshi. For an undead, their body is in extremely good condition. There is no decomposition, they are tough, and they boast superhuman strength. There are even some who excel at martial arts. However, due to rigor mortis, their body has become stiff, and they normally move by stretching their arms and legs out and hopping.

Their intelligence is so high that there are even some individuals that can use magic, and unlike those such as zombies, their behavior does not seem to be driven by impulses; though in the condition of starvation they do become that way, being extremely ferocious and aggressively assaulting human men, using their superhuman strength to pin their victims down and violate them. Also, their fingernails have a toxin that can induce a temporary state of apparent death in human women and cause them to transform into jiangshi.

Their stiff body loosens up as they obtain pleasure and human men's spirit energy. When they straddle a man and begin moving their hips, at first, since their body is completely stiff, all they can do is bounce up and down humping indifferently. But once their body gets warmed up from the pleasure, and they are showered in spirit energy, they gradually shift into moving their hips more alluringly and lasciviously. As their body loosens up, conversely, the man's penis being engulfed by it will stiffen even more, and their softly loosened vaginal walls will flexibly milk his semen.

They have semen poured inside again and again like this during sex and their body loosens up, but after a while their body will start to stiffen again. For that reason, it is recommended that those who become their husbands should maintain the heat and softness of their body as much as possible not just by having sex, but in daily life too by periodically reaching inside their clothes with a hand and rubbing their breasts and buttocks. Additionally, not only does their body stiffen, their thoughts also stiffen. If denied pleasure and energy for a lengthy period of time, their gaze will become fixated on their husband's nether region, their mind will become preoccupied with thoughts of having sex with him, and he will end up getting violated just like when they first met.

The talisman stuck to their forehead is called a “spirit recalling talisman", and by sticking it to a corpse, it is possible to bind the spirit to a corpse, or call the spirit back to a corpse. further, by drawing in demonic energy from the surroundings at the same time, it has the power to trigger a corpse's transformation into a jiangshi. The binding and recalling aspects do not have much effect on those who have already revived, and there is no harm in removing the talisman, but modifying some of the characters written on it can have various effects on the jiangshi it is affixed to. Other than further increasing their superhuman strength or magic, if lewd words are written, it can cause them to express themselves in a more indecent and lustful monster-like manner. By writing in the husband’s name, one can make it so that they recognize their companion and owner more deeply.

However, as mentioned before, jiangshi that have already revived have no need for the talisman, and even if the characters written go against their will, they can peel it off with their own hands right away. So it is not like they can be totally enslaved.

This time's update is “jiangshi”, an undead native to the mist continent. For an undead, their body is in pretty good condition, but it seems rigor mortis stiffens their body. In other words, one must loosen them up! (in a sexual manner)

Your hot thing will warm my chill body 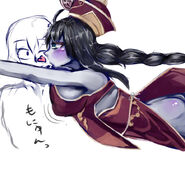 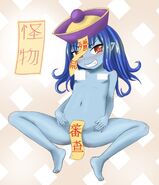 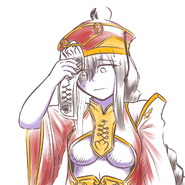 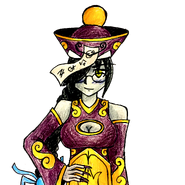 Another pic of Jade (by Mihai) 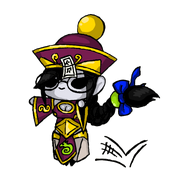 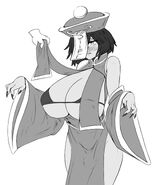 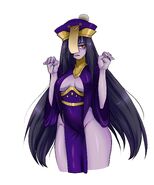 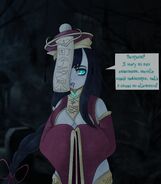 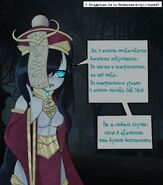 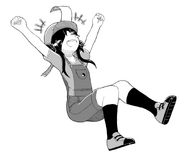 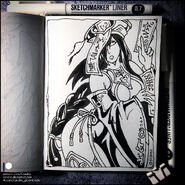 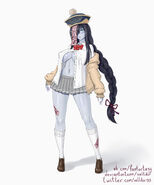 by Noiretox
Add a photo to this gallery

Retrieved from "https://monstergirlencyclopedia.fandom.com/wiki/Jiangshi?oldid=1209088"
Community content is available under CC-BY-SA unless otherwise noted.