A bug type monster and a variety of Arachne that inhabits the Zipangu Region. Aside from those living in forested areas, there are also many that change into human form and live in human settlements.

Normally they have a gentle disposition, which is rare amongst the bad-tempered Arachne and few of them assault people against their will. They are friendly towards humans, especially towards men who are their type. They seduce men by flirting with an attitude akin to that of a prostitute.

From what is written above, it would seem they are not very dangerous monsters, but this is only their face during the daytime. At night, their disposition is very different. They are proficient in the art of seducing men. They approach men with their day face and men who were seduced by them during the day will be overjoyed to have them at their side, believing them to be devoted and beautiful.

But upon spending a night together, when the sun sets, they reveal their night faces. At night they are even more ferocious than other arachne family monsters; they bind men with their threads created by their body and give in to their sadistic nature, unilaterally raping a man repeatedly until the break of dawn, or until they pass out from exhaustion.

When the sun comes up, they return to their gentle day face, but most men who have been with them will be emasculated and will keep getting ravished by them night after night.

If one still has the willpower to resist, even after tasting their night face and is confident about his stamina, then he should have sex with them while they're in their gentle day face and conversely, unilaterally attack them. If one keeps this up every day, eventually masochism will take root in their heart and the time they spend showing their night face will gradually reduce. Instead, the time they spend showing their day face will rapidly grow longer.

Furthermore, just like the Arachne, they build nests using the threads produced by their body and besides that, they are proficient at sewing. Clothes made from their own thread are high-grade products due to both material and craftsmanship. They sell in the marketplace for extremely high sums.

This mamono is based on the story of the jorōgumo, with the visual design based on the real-life Jorō Spider. 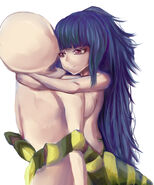 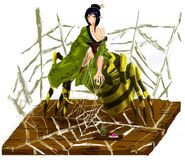 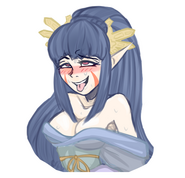 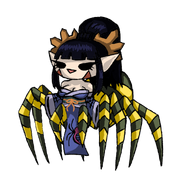 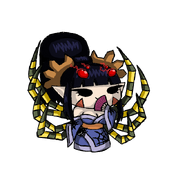 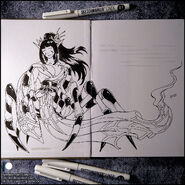 Retrieved from "https://monstergirlencyclopedia.fandom.com/wiki/Jorou-Gumo?oldid=1208224"
Community content is available under CC-BY-SA unless otherwise noted.