The Karakasa-Obake are a race with the form of a large umbrella that were once tools used by humans. They became monsters after gaining life and sentience from absorbing enough demonic energy over time. The Karakasa-Obake are also referred to as "tsukumogami"; a type of monster that used to be tools, but gained a life of their own. They have a strong desire to be "used" by the human males who own them regardless of how they were treated, Those who were handled with care, or were used crudely and thrown away, have an equal chance of becoming "tsukumogami" and seek to be with their owner.

As their original form and purpose was mainly for use on rainy days, the strong desire to serve their owners changed their bodies into that of beautiful young women so they may be more useful in many different situations. They believe that every part of their bodies is to be used in service of their owner as pleasing them is the greatest joy that they can receive. Even if the stimulation they receive is only slight, to the Karakasa-Obake it is magnified greatly, often surprising their owner at the responses they give in return.

Beneath their umbrella canopy there's an organ similar to a giant tongue which they will often use when they think of servicing their owner, using it to seize and draw him close. A lubricating fluid that increases the responses to stimulation is secreted from the tongue. By licking their owner and their own body, they generate even deeper pleasure further pleasing themselves and their owner. Once the Karakasa-Obake closes her umbrella it will repel not just rain, but even swords and magic, creating a world just for her and her owner that bars all intrusion.

In that confined space with two bodies glued together, the only thing one would be able to see is the alluring body of the Karakasa-Obake and the only thing one could do in response is give in to desire and use them. From repeatedly using them the owner would become a prisoner of the pleasure they can bring, just as the Karakasa-Obake desires. The owner will then end up being in the same umbrella with them repeatedly, continuously using them relentlessly. To the Karakasa-Obake and their owners, every day will become full of happiness and ecstasy. A routine that will become difficult to change. Although they no longer have any relation to the weather, their bodies still recognise rainy days as "days when they can be used" causing them to strongly throb with desire.

Those who become tsukumogami after being handled with care repay their owners' kindness with more than sexual favours: they often devotedly provide other services by taking care of his daily needs. The Karakasa-Obake who were treated poorly have the same devoted personality but attack men more frequently, out of fear of being neglected, often attacking their owner with such frequency that it becomes a pathological psychosis.

They easily get lonely when they feel that their owner is not using them often enough and will seek and capture them within their umbrella, locking them both in a world of their own. 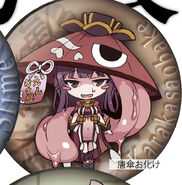 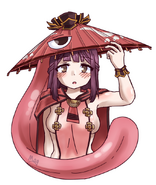 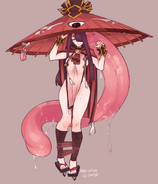 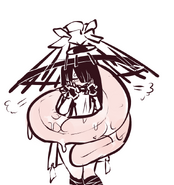 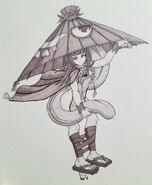 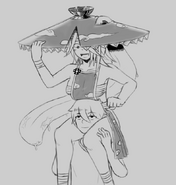 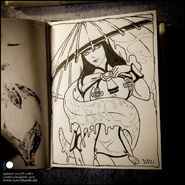