Uncertain, since they move by riding the wind; also found in The Fairy Kingdom

A plant type monster with a peculiar appearance, having a body covered in something like white balls of fluff. Its body is extremely light and it moves by floating through the air. The mature form has the shape of a human, but while developing they are little more than tiny white balls of fluff. Because they look mysterious while dancing through the air, they are called "Kesaran Pasaran who invite happiness". If you catch one, it is said to be bring about happiness.

Exactly the opposite of what one might suppose from their nickname, their fluff balls are actually powerful hallucinogenic compounds that are extremely dangerous to people. If you breath one in, your ability to think will become limited, and all you will want to do is "feel happy". However, while they are still developing, the hallucinogenic effect is weak, and so quite often it just make you feel "a little better". That is probably how they got their nickname.

When they find a man who strikes their fancy, they descend towards him and scatter fluff in pollen form so that he will breath it in. Afterwards, they seek intercourse with the man for their own nourishment and to become able to produce seeds. While overwhelmed by the hallucinations, the man perceives this act itself as an extension of his happiness, and instead of resisting, he will often seek to copulate with them himself, in pursuit of even more happiness.

Due to the profound feelings of euphoria, a lot of men will violently ravish them, but making men happy like that is what makes them happy as well. The smiles never fade from their faces, and the intense pleasure of a violent penetration will cause their smiles to twist into a more ecstatic expression. In this manner, while being engulfed by euphoria together, the pair will just continue to copulate.

Through having intercourse with men in this fashion, they produce their seeds. Then they wrap them in part of their fluff and send it flying through the sky. After being launched, they drift gently while growing, eventually ending up in the mature form, the shape of a human. Believing the stories about "Kesaran Pasaran who invite happiness", a number of men have caught them in their developing stage, and then ended up being attacked after they mature.

These extremely rare monsters are seldom sighted. It seems that peculiar plants, originally inhabiting "The Fairy Kingdom", strayed into the human world while being carried by the wind. It is said that perhaps the reason the Fairy Kingdom is purported to be shrouded in happiness is that many of these monsters live there.

Perhaps because they're plants, they come in a variety of sizes. Even when penetrated by a rigid erection such as this, the little ones' euphoric smile of fulfillment never goes way.
Add a photo to this gallery 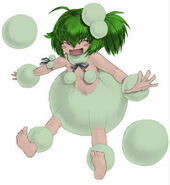 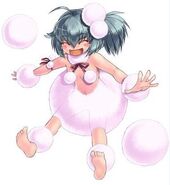 Retrieved from "https://monstergirlencyclopedia.fandom.com/wiki/Kesaran_Pasaran?oldid=1182875"
Community content is available under CC-BY-SA unless otherwise noted.